The Sea, The Sea

'Behold the man. He shuffles out of Clappison's courtyard onto Sykes Street and snuffs the complex air - turpentine, fish-meal, mustard, black lead, the usual grave, morning piss-stink of just emptied night jars. He snorts once, rubs his bristled head and readjusts his crotch. He sniffs his fingers, then slowly sucks each one in turn, drawing off the last remnants, getting his final money's worth." 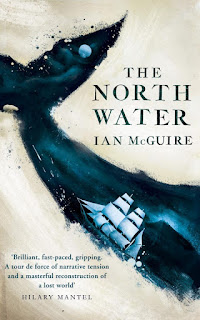 And so begins Ian McGuire's The North Water (2016). The man referred to is Henry Drax, a vile, murderous monster of a man without a moral compass. It is 1859 and Drax is about to board the Volunteer, a whaling ship headed to the Arctic Circle in search of blubber.

Another man about to set sail is Patrick Sumner, an Irish surgeon who joins the crew as a means of escaping his past. A former military man, he made a regrettable choice during the Siege of Delhi in 1857 which saw him ousted and disgraced. His nightly consumption of laudanum eases his conscience.

As the ship sets sail on a fateful voyage, the hey-day of whaling has almost past, with overfishing and a shift to whale oil substitutes like kerosene. The whalers know how dangerous their work is: as they battle against the elements, in small wooden boats against massive sea creatures. There is a lot that can kill you in the North water.

The two men at the heart of this novel are bound to come into conflict. When a boy is found brutally violated and murdered, Sumner discovers just how dangerous Drax is. It becomes a fight for survival on the ice.

This novel is not for the faint-hearted. The language is foul and visceral. There are graphic descriptions of rape, murder, illness, animal cruelty, primitive medical procedures, and the like - which cause the reader to wince or retch. (Indeed I found myself rushing past the clubbing of seals). I have never experienced a book like this before - where I could feel the cold in my bones from McGuire's descriptions, and literally smell the sick, stale air.

As a landlubber, I have no idea why I am drawn to nautical books. But I love tales of adventure set on the high seas - Patrick O'Brian, Joseph Conrad, Daniel Defoe, CS Forester, Herman Melville - and I regularly reread Hemingway's Old Man and The Sea.

The North Water is a gripping novel and one that I would highly recommend. It was longlisted for the Man Booker prize in 2016.
Posted by Ina Guddle at 08:14
Newer Post Older Post Home