Life and death in Palm Island

On 19 November 2004 an Aboriginal man, Cameron Domadgee, died in police custody on Palm Island, off the coast of Townsville. He had been arrested an hour earlier for allegedly swearing at white police officer, Chris Hurley. Domadgee's death, the police investigation into his death, and the coronial inquest that followed divided the Palm Island community and sent shockwaves rippling throughout Australia. These events are documented in Chloe Hooper's The Tall Man (2008). 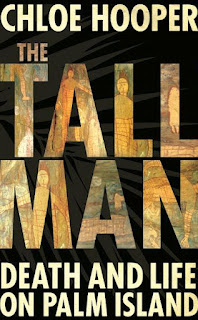 Hooper became involved in the story when she was invited to Palm Island by the Domadgee family's pro bono lawyer. For the next few years she stuck with the story, despite postponements and delays. She became close to the Domadgee family and tried to understand what life is like for Aboriginals and caucasians on Palm Island.

The portrait painted of Aboriginal life is bleak - alcoholism, domestic violence, child abuse, hopelessness, and despair. But Hooper also finds joy, a connection with nature, and a strong sense of community.

Hooper's book reminds me of Capote's In Cold Blood in the way she tells a true story with a novelists ability. I had previously read her debut novel A Child's True Book of Crime (2002) and enjoyed her writing style and storytelling ability.

There is little doubt that Hooper blames Hurley for Domadgee's death. She had tried repeatedly to reach out to Hurley for his side of the story but was refused. When the evidence is presented of Domadgee's horrific injuries, Hurley clearly has a lot to answer for. Although he was cleared in criminal court of actually beating Domadgee to death, Hurley's negligent behaviour and that of the Queensland police union raises a lot of questions.

Hooper won a Walkely award for her article in The Monthly on the same subject.

Note: I am currently on holidays travelling overland across South America. This book is the first ebook I have read, largely on buses through the Andes.
Posted by Ina Guddle at 09:53
Newer Posts Older Posts Home
Subscribe to: Posts (Atom)