In May I had the pleasure of attending a session at the Sydney Writers' Festival on The Trauma Cleaner, in which author Sarah Krasnostein spoke about the award winning biography she had written. 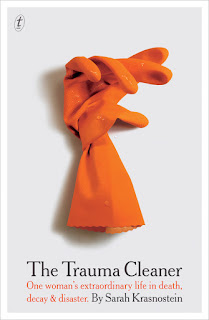 The subject of her book is Sandra Pankhurst, a business woman who specialises in trauma cleaning: attending crime scenes and homes of hoarders, and restoring them to order and tidiness. This is not a job for the faint-hearted. Rather it requires someone with a deep empathy, a desire to heal and an iron gut to get past the rotting food, vermin, mould, bodily fluids and accumulated detritus.

But Pankhurst's unusual job is only one aspect of her extraordinary life. She was born male at birth and experienced a deeply unhappy, abusive childhood in the family to which she was adopted. She married and had children, before undergoing the transformative surgery that would forever change her life. Sandra then worked as a prostitute in Melbourne and Kalgoorlie, surviving a violent assault. Later, she found love, married Mr Pankhurst and found more mainstream work in a funeral parlour and running her own businesses. Her work for the past twenty years, cleaning the squalor left by others, is a job she takes pride in and excels at. 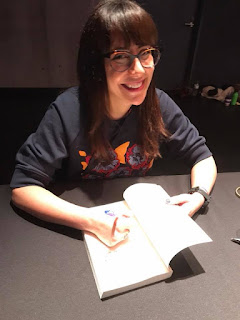 Krasnostein has crafted a remarkable tale, inserting chapters about Sandra's work with clients in amongst the story of her life. Sandra's memory is faulty, marred by years of drug and alcohol abuse and suppressed by trauma, so Krasnostein has had to piece together the fragments of Sandra's reminiscences and bring order to her life story. Sandra is an incredible woman, who has picked herself up over and over again, and managed to move beyond the pain and abandonment.

Krasnostein writes that: "Sandra is at once exactly like you or me or anyone we know and, at the same time, she is utterly peerless." I believe this to be true. Sandra is unlike anyone I have ever met, and yet once you get past our differences, she is like me and the other women I know, a woman with a strong heart, deep empathy and a desire to belong.

The Trauma Cleaner is one of the most remarkable books I have ever read. It pushed me out of my comfort zone several times, and made me think about how other people live. The stories of Sandra's clients, the hoarders, were particularly heartbreaking. They had gone from being functioning, intelligent, family-oriented people to living in a crushing environment surrounded by filth they cannot part with. Each one needing help, needing empathy, needing love.

This book has won many awards this year, including the Victorian Prize for Literature, Victorian Premier's Literary Award for Non-Fiction, ABIA General Non-Fiction Book of the Year, and been shortlisted for countless others.

Last month, while I was overseas, the Miles Franklin Award shortlist was announced.

The Shortlist consists of the following books: 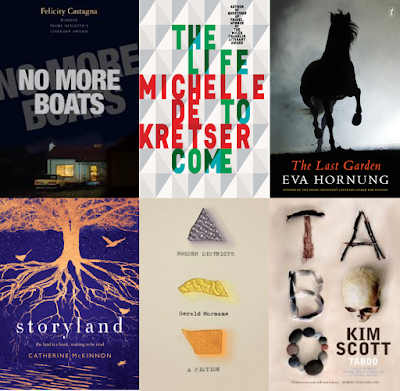 The Winner of this prestigious literary award will be revealed on 26 August. My money is on Gerald Murnane, with Kim Scott as a close second.
Posted by Ina Guddle at 06:00

For the entire month of June I travelled with my family throughout the United Kingdom. We drove from Edinburgh down to London, passing through Glasgow, the Lake District, York, Manchester, Cambridge, Norfolk and Suffolk, and beyond.

With two 24 hour flights from Australia to London and back, and countless hours on trains and other forms of transport, I figured I would have a lot of time to read. Before I left I carefully planned my holiday reading, loading up my e-reader with books inspired by my travel plans. However, with the hustle and bustle of sightseeing and catching up with friends I came home having read none! So here's a look at what I didn't read on my vacation.

Our first stop was London, and I had tickets to see Hamilton in the West End. Some weeks before my trip I started reading Ron Chernow's bestselling biography Hamilton (2004), on which the musical was based. It is an interesting read, although I have not yet finished it.  Historical political biographies can be dry and dull, but not Chernow's. Hamilton is such a fascinating character, coming from nothing to be a Founding Father of a new America. I look forward to continuing this book now that I am home. 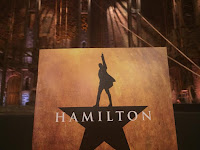 Lin-Manuel Miranda's musical is an incredible adaptation of this biography. Mum and I scored front row seats and were literally within spitting distance of the action. The diverse West End cast were gifted actors who drew us into the story from the moment they stepped on stage. Since returning from holidays the soundtrack has been played on repeat during my daily commute and I cannot wait to see this show again if they ever bring it to Australia.

We travelled by train from Kings Cross to Edinburgh Waverley - a lovely trip through the countryside. Each time I journey this way I marvel at how the scenery changes once you cross into Scotland; the landscape becoming rugged and green. For my train trip I flicked through my ereader and found a title to enjoy: Patricia Highsmith's Strangers on a Train (1950). The story is about two men who meet on a train and agree to swap murders. Highsmith is a gifted writer and I always enjoy her work. Alas, I did not finish it before the end of my trip, and will need to pick it up again on or before my next train journey. 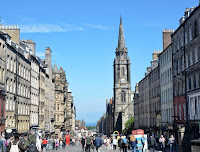 Edinburgh always feels like a second home to me. I have many fond memories of past visits, and delight in catching up with old friends whenever I am in town. Each time I go to Edinburgh I get a hankering to read Ian Rankin. As you wander down the Royal Mile, and peek in the closes, you feel as though you are walking alongside Inspector Rebus.

Throughout the 1990s, long before I began blogging, I was obsessed with Rebus and read the books in order from Knots and Crosses (1987) to The Hanging Garden (1998), savouring each one and anxious for the next instalment. Then the TV series came, and I got distracted by new obsessions so did not return to Rebus. I thought I would get back into Rebus with book #10, Dead Souls (1999) on this trip but my reading time was limited in Scotland by my hectic social life, and I will have to save this for another day.


After a couple of days in Glasgow I was drawn to architect and designer Charles Rennie Mackintosh more than to any authors or books. I love Mackintosh's art deco work and enjoyed time visiting his home and tea rooms. It was devastating to hear that his Glasgow School of the Arts building was destroyed by fire a few days after we left the city.

Our next stop was the Lake District, where we stayed in an isolated art deco hotel on the edge of a lake. As my family and I sat in the dining room, we remarked how very Christiesque the setting was, as if Poirot himself would suddenly appear and deduce which among us was a murderer! The location was beautiful and had we more time there, I would have loved to curl up in a leather armchair in front of the fire and read the next Agatha Christie on my list, The Murder of Roger Ackroyd (1926), as it would have been the perfect setting. 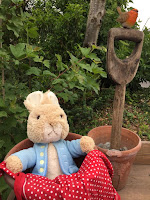 The Lake District is a beautiful part of England and we enjoyed several days here, visiting family history sites and taking in the scenery. One of the highlights of our stay was our visit to Beatrix Potter's home Hill Top. We toured her cottage and garden and enjoyed lunch in a local historic pub. It was lovely to see the setting of the tales I enjoyed so much as a child. As we strolled around her home and nearby village you could sense Peter Rabbit, Flopsy, Jemima Puddle-Duck, Squirrel Nutkin, Tom Kitten and so many more beloved characters.

After a brief stop in York we arrived in Manchester, a delightful city infused with a rich culture. We visited the Lowry, and saw the incredible 'Matchstick Men' works of Salford's most famous artist LS Lowry. We visited the stunning Manchester Central Library and I delighted in the displays on the women's suffrage movement.

Manchester has a diverse literary history with writers from Karl Marx to Anthony Burgess having lived and/or worked here. For me Manchester is all about Elizabeth Gaskell, one of my favourite writers of all time. I have read many of her works, including North and South (1855) and Wives and Daughters (1865) several times, but the one book I was hoping to read on this trip was her first novel Mary Barton (1848). I had also wanted to visit her home in Manchester but it is only open three days a week and did not align with our travel plans. Something to look forward to on my next visit...

We spent a week or so travelling across the English countryside through Cambridgeshire, Norfolk, Suffolk, and Hertfordshire. Our days were filled with family history, churches and cathedrals, and even the viking burial ground at Sutton Hoo.

Every time I visit England I think about Jane Austen. On this trip, Austen loomed even larger as we went to Gretna Green, spent a day in Bath and went to the Jane Austen Centre, and travelled around Hertfordshire. Austen was a pervasive figure on our trip. I have read all of Austen's novels countless times and each re-read reveals something new. I didn't even attempt to delve into one again on this trip, although I did get very nostalgic and almost tempted by Persuasion!

Back in London for our last few days we wandered through Bloomsbury, once home to writers like JM Barrie, Charles Dickens, John Wyndham, William Butler Yeats and Virginia Woolf. We visited Denmark Street, home and workplace of Detective Cormoran Strike, en route to Foyles Bookstore on Charing Cross. We also attended the hilarious West End production of Book of Mormon (a book I have no desire to read).

I did pick up a few books on my travels that I have long wanted to read including Janet Malcolm's The Journalist and the Murderer, and Julian Stodd's Social Leadership Handbook, but elected to pack them in my suitcase, rather than read them on the return voyage home.

While I didn't actually finish any books on my holiday, I had an incredible month of learning and came home with a renewed passion for literature. Best get reading then...
Posted by Ina Guddle at 22:43
Newer Posts Older Posts Home
Subscribe to: Posts (Atom)