Readers of this blog will know I am more than a little bit obsessed with Australian writer Helen Garner. While I admire her fiction, it is her non-fiction works which I really love. I have often said I would read anything she writes - shopping lists, post-it notes, anything...  As luck would have it, she has now published the first volume of her diaries. 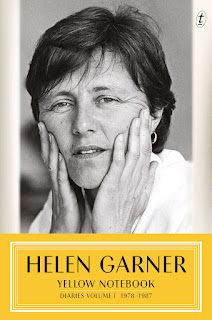 Helen Garner's Yellow Notebook - Diaries Volume 1 (1978-1987) covers an interesting period in her life. She has just published her debut novel Monkey Grip (1977) and is on the cusp of success. But she is also riddled with self-doubt, fuelled by any whiff of a negative critique. She is a hard working author who writes frankly about her successes and failures - her inability to create and when the words flow easily - providing insight to the feast-or-famine life of a writer.

The diary isn't written in a daily format, rather it is comprised of snippets, observations, sentiments and glimpses. In one entry she will describe her anxiety as an author, the next she will write about her blossoming Christianity. Then she will insert a scathing critique like 'Siouxsie and the Banshees at l'Empire. They were revolting' (1978, p6).  She writes with such clarity and conciseness, wit and immediacy, that readers can't help but become engrossed.

Throughout the ten years of this notebook, we meet a range of fascinating people and gain some understanding of Helen's character.  Her daughter, M, is growing and becoming more independent. Helen's fierce maternal love and admiration for her child seeps through the pages.

Her marriage to second husband F is fading and she contemplates their future in the pages of her notebook. One diary entry that particularly struck me was when Helen writes 'F offered to pay some of my expenses so I could stop doing journalism and concentrate on my own work. I felt a stab of panic at the thought of being dependent' (1982, p31). Having experienced a similar sensation at one point in my life, I could completely relate.

It is this relatability which makes reading her diaries so enjoyable. Helen's vulnerability and self-deprecation is on full display. She can be cranky, mean-spirited, loving and kind. She is wholly present and human.  My favourite sentence in the whole book is this:  'I made some curtains for my room and they are a disaster' (1985, p137). There is something about the simplicity and frankness of her critique that made me roar with laughter.

While not a book for every reader, I found such pleasure in reading the Yellow Notebook. I look forward to the next volume.

My reviews of some of Garner's other works appears on this blog:

If I'd have known that I could make a living as television critic, I reckon I would have made different choices about my studies and career. Emily Nussbaum, television critic for the New Yorker, has my dream job as a Pulitzer Prize-winning columnist, insightfully analysing popular culture. Nussbaum has compiled a collection of her articles in I Like to Watch - Arguing my way through the TV Revolution (2019).

'Buffy the Vampire Slayer' is the show that started Nussbaum's career. Often dismissed as a superficial program for young people, Nussbaum argues, in the first essay in this collection, that 'Buffy' is multilayered and more complex that it appears. 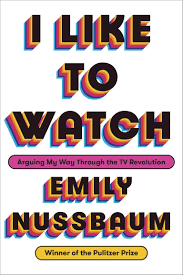 Throughout I Like to Watch, Nussbaum writes intelligently about many of the shows I have watched over the past twenty years - 'The Sopranos', 'Sex and the City', 'Girls', 'Marvellous Mrs Maisel', 'The Good Wife', 'The Americans', 'True Detective' and more. Her essays allowed me reminisce fondly about some of these shows and made me want to rewatch others to consider some of the contextual angles she observed. There are also essays about shows I haven't seen (like 'Jane the Virgin', 'Blackish', 'The Comeback') which, while still interesting, are less engaging. Nussbaum includes profiles of Joan Rivers, Ryan Murphy and Jenji Kohan in this collection, observing how their lives are reflected in their art.
One of the most powerful pieces is 'Confessions of a Human Shield', a long essay in which she explores Woody Allen, Louis CK and the #MeToo movement. Nussbaum writes about her views on Allen changed over time, having been an avid fan from her teenage years, and now seeing him and his films in a different light.  She is uncomfortably torn and asks whether you can seperate the art from the artist.

Nussbaum's sharp observations have a distinctly feminist lens and it is great to read a collection that praises art aimed at women, people of colour and other marginalised groups. In her essay on 'Sex and the City', Nussbaum pushes back against 'the assumption that anything stylised (or formulaic, or pleasurable, or funny, or feminine, or explicit about sex rather than about violence, or made collaboratively) must be inferior'. She elevates content targeted to women and dismissed the notion that TV is a 'guilty pleasure'.

Television is often seen as a lesser art form, although that is changing with recent 'must see' event television and the arrival of streaming services which has seen top cinema directors, writers and actors drawn to the small screen. As an avid viewer myself, I appreciate Nussbaum's validation of this particular art form.
Posted by Ina Guddle at 06:39
Newer Posts Older Posts Home
Subscribe to: Posts (Atom)