For the past few weeks I have been engrossed in the epic biography of Queen Victoria. Dr Julia Baird, historian and journalist, has crafted a fascinating portrait of the long-reigning monarch. Victoria the Queen (2017) is meticulously researched, drawing on correspondence, diaries and other primary sources from Victoria and those around her to produce fresh insight into the influential Queen. 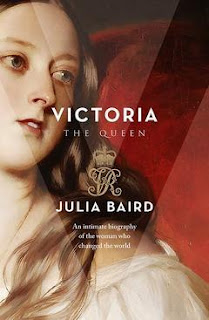 Prior to reading this biography I knew very little of Queen Victoria and, in truth, had little interest. My image of Victoria was one of a grumpy old monarch, she of statues and memorials, aligned with the Dickensian bleakness of the era she defined. For months I would look at Baird's Victoria in each bookstore I passed, flick through the pages and wonder if I should give it a go. I am not sure what compelled me to finally pick up this weighty tome, but I am delighted that I did. Baird's biography of the Queen is an incredibly readable tale of an extraordinary woman.
Victoria was an unlikely monarch. Fifth in line to the throne at birth in 1819, she was never expected to rule. Her various uncles had no surviving legitimate children, so when she was just 18, upon William IV's death, she became queen. The young Victoria was a petite, adventurous girl who loved to dance. She became estranged from her mother, but was devoted to her governess and tutor, Baroness Louise Lehzen. A passionate young woman, Victoria was curious and keen to rule. 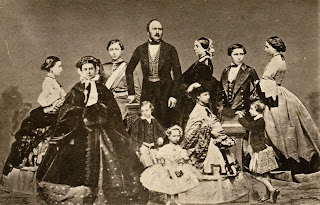 Many royals have arranged marriages, designed to strengthen alliances. Fortunately, Victoria was madly in love with her betrothed, Albert, and their union had all the hallmarks of a fairytale romance. However, in marrying Albert, Victoria essentially gave up her brief enjoyment of her important royal duties to become a homemaker. Albert had traditional views on gender roles in marriage, and Victoria settled in to being a wife and mother. Meanwhile, Albert increasingly took on the Queen's official duties, involving himself in the politics and policy of the realm.

Reading of Victoria's many pregnancies - each one fraught with danger for mother and child - one marvels at her pioneering spirit and the endurance of a woman who spent almost twenty years giving birth. Victoria ignored medical advice and sought pain relief by inhaling chloroform, and her actions paved the way for British women to follow her lead. But as I read of Victoria's challenges of motherhood, her tense and controlling relationships with many of her children, and the physical toll successive pregnancies took on her petite frame, I wondered at what might have been if Victoria had access to birth control. Would she have had fewer children, enjoyed them more, and returned to work earlier to actively rule alongside Albert?

The premature death of her beloved Albert, at age 42, sank Victoria into a deep mourning. She retreated from public view and wore black to display her grief. Disreali coaxed her back to official duties in the late 1860s. 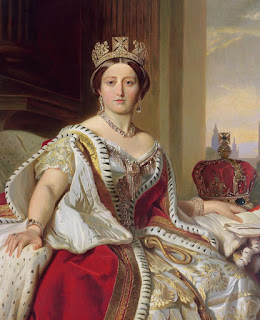 Queen Victoria was influenced by a number of important men in her life. Lord Melbourne, the first Prime Minister (1835-1841) during her reign, was a paternal figure who guided her understanding of politics and her role as monarch.  Her beloved husband Prince Albert, with whom she had nine children between 1840 and 1857, expanded her thinking and helped her rule. Prime Minister Benjamin Disraeli (1874-1880) was also a close friend and adviser. As a widow, Victoria sought friendship from her highland servant, John Brown, and in late life had an unusual relationship with her Indian Munshi, Abdul Karim.

During Victoria's 64 year reign, Britain and the world underwent a tremendous transformation. In telling the story of Victoria, Baird covers the industrial revolution, the political unrest and overthrow of European monarchs, colonisation across India, Africa and the Far East, the Irish famine and movement for self-rule, suffrage and social reform campaigns, and numerous bloody wars. Importantly, Queen Victoria was a constant during a tumultuous time.

Victoria was a mass of contradictions. She vocally protested against racism and inequality yet turned a blind eye to the suffering of so many. She would not have identified as a feminist, but promoted women's education and was dismissive of the women's suffrage movement. Baird writes:

Victoria described herself conveniently as 'anomalous'. She protested that women should not hold power, all while being increasingly vigilant about the protection of her own power.

These contradictions make Victoria a frustratingly fascinating character and her life story a compelling read.

Baird is a gifted storyteller, using her talents as a journalist to explore Victoria's life and times in a captivating way. As a historian, she used her research skills to dig deep, examine diverse sources and uncover new facts about Victoria. Baird discovered that Victoria's family censored her correspondence, burning communications relating to John Brown and Abdul Karim, and removing items related to Victoria's domestic life and motherhood - a tremendous loss to history.

I would highly recommend Julia Baird's Victoria: The Queen to anyone with an interest in history and biography.
Posted by Ina Guddle at 08:18 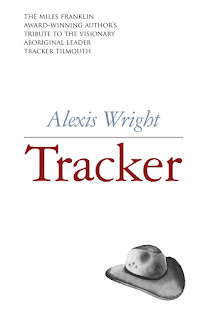 The Stella Prize winner was announced this week with the award going to Alexis Wright for her biography of Tracker Tilmouth, titled Tracker.

Tracker Tilmouth was an Aboriginal leader and entrepreneur who died in 2015 at 62 years of age. Part of the Stolen Generation, Tilmouth was raised on a mission on Croker Island, and went on to become a well regarded activist who established the Central Australian Aboriginal Legal Aid Council. Wright was a family friend, who set out to write his memoir by talking with those who new him.

At the presentation ceremony on 12 April 2018, the Chair of the Stella Prize judging panel, Fiona Stager said:


In awarding the 2018 Stella Prize to Alexis Wright for Tracker, the judges wish to acknowledge the craft of the author and pay tribute to the richness of the memories shared by the many people she interviewed. This book will enrich and change the understanding of readers. A man like Tracker Tilmouth could change our world. It takes a writer like Alexis Wright to change the world of Australian letters.

Sounds like a fascinating depiction of an extraordinary man.

Alexis Wright is writer of both fiction and non-fiction. She is possibly best known for her novel Carpenteria (2006) which was lauded by critics and received the 2007 Miles Franklin Award, Queensland Premier's Literary Award and numerous other commendations.
Posted by Ina Guddle at 16:16

The 2018 Sydney Writers' Festival (SWF) Program has been announced, plans have been made and tickets have been purchased. While the Festival itself does not take place until May, I was fortunate to attend a SWF event on 26 March - An Evening with Geoffrey Robertson - with my festival friend. 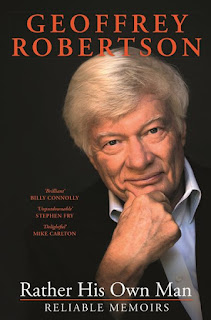 Geoffrey Robertson QC is now 71 years old and in his 'anecdotage'. He has just published an autobiography, Rather His Own Man (2018), in which he shares memories from his childhood in Sydney, his move to the UK, becoming a barrister and celebrated human rights lawyer. Founder of Doughty Street Chambers, Robertson was called to the bar in 1977 and took silk in 1988. He initially became a high profile criminal defence lawyer in London, before moving into libel and media cases, and later numerous international human rights cases. 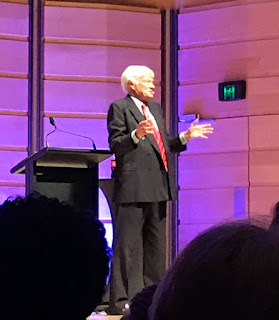 Robertson is such a great storyteller and for 90 minutes he kept the audience enraptured as he told tales of growing up, attending school in Epping, life as a student at University of Sydney and then his departure to England. Erudite and witty, Robertson then went on to share many fascinating legal cases he championed, and his perspective on world events. He spoke lovingly of his ex-wife, Australian author Kathy Lette, and their adventures together including tales of their visits to 'Buck House'. He was also able to shut down an annoying heckler who attempted to disrupt the event by shouting out conspiracy theories.

Perhaps the most moving segment was when Robertson read from his new memoir about the death of his mother. He spoke of the tyranny of distance, getting a call from afar to hear your parent has been hospitalised, quickly booking a flight home, communications silence while travelling around the world, then the bedside vigil while awaiting death. He was unprepared for being orphaned at age 70 and wrote lovingly of his parents.

All in all, it was great night out at the Sydney Writers' Festival, leaving me excited for the main event in May.
Posted by Ina Guddle at 07:03
Newer Posts Older Posts Home
Subscribe to: Posts (Atom)