In the valley of good and evil

American author John Steinbeck has always been one of my favourite novelists and his story of Depression-era struggle, The Grapes of Wrath (1939) is one of my all-time favourite novels. Over the years I have made my way through many of his novels but for some strange reason I had never read East of Eden (1952). I decided it was time to rectify this oversight and have now had the pleasure of reading East of Eden. 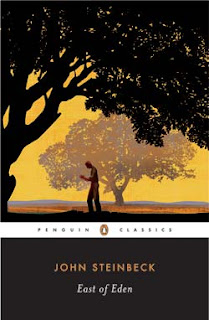 Set in California's Salinas Valley in the early 20th century, East of Eden tells the story of two families - the Trasks and the Hamiltons - over several generations. The Hamiltons are Irish immigrants who have moved to a farm to raise their large family. Adam Trask moves to Salinas from Connecticut with his young wife to start a new life on a neighbouring farm. Adam and Samuel become friends and support each other through difficult times, as their destinies become linked.

The story parallels parts of the Bible, sharing much in common with the Book of Genesis - the tales of Adam and Eve and brothers Cain and Abel.  Adam Trask has a younger brother Charles who competes for their father's attention. Later, Adam's wife Cathy gives birth to twins, Cal and Aron, who also compete with one another.

There are a handful of interesting minor characters who are instrumental to the narrative. My favourite is Lee, the Chinese cook who lives with the Trasks and guides them through his philosophical teachings. But I also loved the character of Cathy and was keen to see whether she would get her comeuppance after all her manipulative evil-doings.

Steinbeck's love of the Salinas Valley comes through in his meandering descriptions of the landscape. While these descriptions give the reader a clear sense of the location, I found they occasionally disrupted the action. Despite this, I loved reading East of Eden and have spent the time since thinking about the novel and pondering the fate of all the characters. There is extraordinary richness in the layers of this story. While it in no way tops The Grapes of Wrath, it comes pretty close... 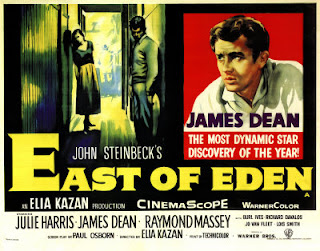 In 1955 Elia Kazan directed the film based on part of East of Eden. Staring James Dean, Raymond Massey and Julie Harris, the film won the Golden Globe for Best Picture in 1956. I have not yet seen the film, but plan to do so shortly.
Posted by Ina Guddle at 17:49
Newer Posts Older Posts Home
Subscribe to: Posts (Atom)