This has been the worst week I have had in a long time. Like many people I had lulled myself into believing that hope would triumph over hate; that the voters' remorse expressed after Brexit would encourage a greater voter turnout; that this long, bitterly divisive campaign would end in a celebration of the shattering of the glass ceiling and the building of bridges not walls. But alas, hate won.

As a consequence much of my reading this week has been a postmortem. Some of the highlights are:

On Friday 11 November I had the pleasure of attending the Sydney Peace Prize presentation at Sydney Town Hall. The prize was awarded to Naomi Klein for her work on the environment. Klein spoke about the election of Trump and what it could mean for the planet - especially given that he is surrounded by climate change deniers. Klein's message was one of hope - of small acts of resistance and heroism, of listening to our indigenous peoples who have cared for the land for centuries, and of caring for our planet.

In the room were other heroes of mine: Aboriginal activist Senator Pat Dodson introduced Klein, and Human Rights Commissioner Professor Gillian Triggs, a woman of tremendous conviction and integrity, presented Klein with the award. Triggs received a standing ovation from the sell-out crowd.  The video of this event is now on YouTube and it is well worth a watch.

So despite the crappy week, I will choose optimism over fear. I will continue to support causes I believe in and to stand up for the disadvantaged. I will believe in a better America in years to come.

Note: I had written much of this a week ago with the intention of publishing on 13 Nov. That I hadn't actually uploaded this post speaks to the malaise I have felt. Will post despite the lateness and post something happier next.
Posted by Ina Guddle at 07:59

The End of the Road

It's election day in America. Finally, the citizens can go to the poll, cast their votes, and thereby put an end to the longest, most bitter, divisive and contemptuous campaign in American history. Xenophobia, racism, bigotry, misogyny and hatred have been the pervasive narrative of this campaign, at least on the Republican side. I hope that once the votes are counted, Clinton will win and she will bring the country together again.

As a political scientist, I have a keen interest in American politics and I freely admit I am rooting for Hillary Rodham Clinton. Not only is she the most experienced person ever to run for office, she will make history as the first woman to be elected to the highest office in the land.

Trump is an embarrassment - to the Republican party and to America. How he managed to become the Republican candidate leaves many shaking their heads, and the party itself will need a serious postmortem. Of course... frighteningly, he still could win.

The latest Quarterly Essay (QE63) is Enemy Within - American Politics in the Time of Trump by Don Watson. In this Essay, Watson heads to middle America - to Wisconsin - in an attempt to understand the Trump phenomena and the disenfranchisement of many voters. Here the gap between rich and poor is most pronounced with high levels of child poverty, lack of affordable health care, and incarceration. This lack of equity is of great interest to me (see The Spirit Level) and something that desperately needs addressing by the American government.
Watson explores how the two parties are deeply divided. Republicans have the alt-right and a more centrist view. Likewise the Democrats have Clinton liberals and Sanders left wing social democrats. Neither party is united and the two party system is deeply flawed.

I always enjoy Watson's writing style, and the travel memoir passages are enjoyable. But, I felt like there was nothing new here in terms of political commentary, although perhaps I am over-read on this subject and others would not feel the same.

So America, Vote Wisely!
Posted by Ina Guddle at 07:48

Rage Against the Machine

I'm mad as hell and I'm not going to take it anymore! 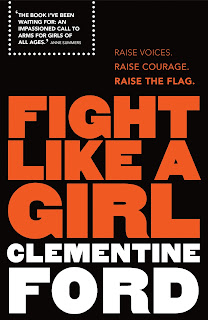 Having just finished Clementine Ford's Fight Like A Girl (2016) I feel angry at the crap women have to put up with everyday. I have felt the pressure to look and act a certain way, been asked about my fertility in a job interview, been paid less than a less qualified man for doing the same job, had men explain things to me, not been heard in meetings, been afraid, attacked, judged and ignored.  Ford's book was instantly relatable on many levels.

Part memoir and part manifesto, Ford writes about her childhood eating disorders, her struggles with mental health and body image, her sexual experiences, her abortions and her battles with online trolls. I found her writing humourous, readable, bold and brave. She holds nothing back, even though she knows she is arming those who seek to destroy her.

What I liked about Ford's book was her wit and the brashness of her language. Ford's voice comes through loud and clear as she says it like she sees it. I found many of her arguments compelling, particularly her exposure of the hypocrisy of the Not All Men and the White Ribbon movement (when sports clubs talk about the problem of violence against women then defend their players on charges of assault) and the media response to the Jill Meagher murder while ignoring the deaths of aboriginal women.  I also enjoyed her pop culture references (shout outs to Leslie Snope and Jessica Jones among others). I came away with a better understanding of Ford and what motivates her.

But I was frustrated by Fight Like a Girl too. First, the book is in need of a good edit as there are far too many passages that repeat themselves time and again (like references to the sea of man-baby tears). Her arguments would have been more compelling if the writing was sharper. More than that, I was frustrated by the lack of a clear call to arms. Ford urges "It's okay to be angry" - which is great. I get that and I am angry. But now what?  Other than getting mad what do we do with our rage? This is not the love letter to girls she thinks it is.

Ultimately, there isn't anything new here. I am glad I read Ford, but in terms of feminist memoir and manifesto, I much prefer the insight and wisdom of Roxane Gay and Gloria Steinem.
Posted by Ina Guddle at 08:16
Newer Posts Older Posts Home
Subscribe to: Posts (Atom)