A couple of years ago I read Rebecca Solnit's essay 'Men Explain Things to Me' (2012). It was a wonderful exposé on the way women are silenced, and the effects this loss of voice has.  Solnit wrote the essay following an exchange with a man who patronisingly tells her all about a book he had not read, but which Solnit had actually written. This essay inspired the 'mansplaining' concept, which has become a common expression for anytime women are spoken at with condescension by men. 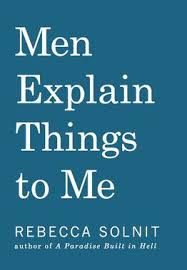 Recently I revisited Solnit's essay, and continued on to read her collection Men Explain Things to Me (2014). Beyond the title essay, Solnit explores a number of issues that affect women, from a feminist perspective.

'The Longest War' is about rape. It opens with the gang rape and murder of Jyoti Singh on a bus in Delhi in December 2012, moves on to other examples like the teenager assaulted by the Steubenville High football team and the eleven-year old in Texas raped by twenty men. Solnit writes that gang rape is everywhere and that there is 'a pattern of violence against women thats broad and deep and horrific and incessantly overlooked'.  The phenomenon of violence against women is not new. Solnit argues  that continuing to treat each act of violence as an isolated issue is part of the problem, and that the broader culture of toxic masculinity needs to be addressed as a civil/human rights issue.

In 'Worlds Collide in a Luxury Suite' Solnit takes on the International Monetary Fund and Dominique Strauss-Kahn's exploitation of women. 'Grandmother Spider' explores the disappearance of women giving examples like genealogy, in which women historically have taken on their husband's name and  been erased from the patriarchal family tree. 'In Praise of the Threat: What Marriage Equality Really Means' is about traditional marital roles and how it can be redefined. While the other essays look at hysteria and not taking women seriously ('Cassandra Among the Creeps'), denying women their voice ('#YesAllWomen Feminists Rewrite the Story), and about how women are kept in place by trolls and social norms ('Pandora's Box and the Volunteer Police Force').

While the title essay is the one that has received the most attention, I greatly enjoyed her essay on Virginia Woolf - 'Woolf's Darkness: Embracing the Inexplicable'. Woolf, Solnit writes, 'is celebrating getting lost, not literally lost as in not knowing how to find your way, but lost as in open to the unknown, and the way that physical space can provide psychic space.' Her admiration of Woolf oozes from this essay, and made me want to rush out and reread Woolf again.

I greatly enjoyed my time with Solnit's collection. However, the cumulative effect of these essays, read one after another, is a bit of a repetitive blur. I wish I had taken more time to read, leaving a gap between each one, as they were meant to be read. I would recommend this book to anyone interested in contemporary feminist thought.
Posted by Ina Guddle at 09:04

We are never meeting in real life (2017) is a collection of essays by Chicago-based writer Samantha Irby, which appeared on countless 'best books' lists. The reviews intrigued me, so I chose to begin my reading year with her book. 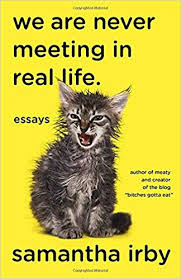 From the opening essay "My Bachelorette Application" I was hooked. Irby describes herself as 'passably female', '35ish (but could pass for 46 to 52 easily; sixtysomething if I stay up all night)', looking for 'someone too lazy to cheat' and 'who will leave me the hell alone for extended periods of time without getting all weird about it'.

Irby is hilarious, snarky, bitter and fun. She has no filter, is prone to over-sharing, and wildly self-depreciating. She talks openly about her weight, her Crohn's disease and other health complaints, her love-hate relationship with her cat, her sex life, and her job as a client services director at a veterinary practice.

Beneath this hilarity are dark truths that need to be told. She writes about being raised in poverty by an ill mother and an absent father, homelessness, health, race, and other real-world problems.  There is a cynical, sharp edge behind the humour, such as her fear of dying without tidying her home and deleting her browser history.

This book is not for everyone. The language is colourful and explicit, the subject matter is often uncomfortable. Indeed, while I enjoyed the bulk of the essays, there were times I felt like her confessional style was veering towards too much over-sharing. But it is up to her what aspects of her private self she chooses to protect.

I am glad I learned about Irby and I look forward to reading her Bitches Gotta Eat blog. On the strength of this book, Irby now has a TV deal so I will be interested to see what she comes up with next.
Posted by Ina Guddle at 08:45

Each year I like to set aside some time to reflect on my reading habits and prioritise my reading for the coming year.

Two books a month is what I can reasonably achieve given my workload, but to stretch myself I will set a target of 30 books in 2018. And of course I will continue to blog about my reading here.

There are a number of books I have on my bedside and want to read in 2018 including:

Several books I will need to source from libraries and bookstores include:


I need to leave room in my reading schedule for new books to be published in 2018, like former Human Rights Commissioner Gillian Triggs' book Speaking Up (due October), Asne Seierstad's Two Sisters (due February), Michael Ondaatje's Warlight (due May), Feel Free: Essays by Zadie Smith (due February), Beautiful Days by Joyce Carol Oates (due February), Tangerine by Christine Mangan (due March) and Meg Wolitzer's The Female Persuasion (due April).

To diversify my reading and to have a bit of fun, I thought I might try some Book Reading Bingo. I made the following Bingo board with the view to expanding my reading horizons. I wonder how many times I can get Bingo before the year is out. Feel free to join in!


Plenty to sink my teeth into here. Let the adventures in reading begin...