From a Longlist of 13 titles and a Shortlist of five, the winner of the Booker Prize for fiction was announced on 14 October 2019. Controversially, the judges decided to split the 50,000GBP prize in two and announce joint winners this year.

The prize is shared between Margaret Atwood's The Testaments and Bernardine Evaristo's Girl, Woman, Other. 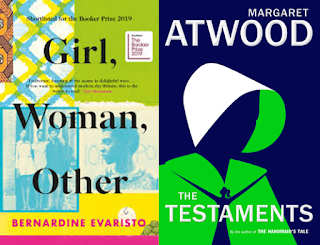 Atwood has been my pick for the prize ever since the longlist came out. Having read The Testaments, I think it is a worthy recipient. Extremely well written, it covers urgent, contemporary themes in a compelling way. Atwood previously won the Booker in 2000 for The Blind Assassin.

Evaristo is the first black woman to win this prize in its' fifty year history. I have not yet read Evaristo's novel, but look forward to doing so. Her work weaves together the stories of 12 British women, exploring race, class, gender and sexuality.

While I think it is wonderful to give this prize to two incredible women writers, I do feel that it short changes the winner and that the judges should have been able to make a definitive decision. The judges released a video right after the announcement attempting to explain why they 'flouted the rules' and crowned two authors.

Atwood needs no assistance in selling her book - it has been a bestseller since before it was published. But I am pleased to see Evaristo's work getting the attention it deserves and expect it will increase in sales following this award.
Posted by Ina Guddle at 18:15
Newer Posts Older Posts Home
Subscribe to: Posts (Atom)