Takedown Twenty (2013) is the latest instalment of the Stephanie Plum series by Janet Evanovich. 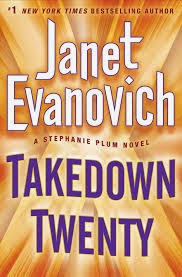 After twenty novels the formula has been well established and Evanovich can write them in her sleep. Clumsy bounty hunter Plum and her lycra-clad sidekick Lula go in search of bail skips. Along the way they destroy a number of vehicles, narrowly escape disaster, eat way too much junk food, and encounter all sorts of colourful characters.

In this story Steph is after Uncle Sunny, a mobster who is related to her on-again, off-again boyfriend Joe Morelli. Sunny is accused of murder but the whole neighbourhood protects him as he is loved and feared in equal measure and sings like Sinatra. She is also helping Ranger to investigate a string of granny-grab dumpster-dump murders so spends a lot of time at bingo.

After being kidnapped, knocked out, bruised and battered, Steph seriously considers a career change and becoming more domesticated. Her parents are keen on her taking a job as a butcher, largely because of the access to discount meats. She also comes close to deciding on her romantic partner.

Grandma Mazur provides some comic relief as does Lula with her fake designer bags and obsession with a stray giraffe (actually, I hated the inclusion of the giraffe as it was a meaningless distraction).

I have long given up on the idea that Evanovich would return to the form of her early days when the novels were darker. In fact there was a time when I had almost given up on the series. Now I read them out of some sense of loyalty and an ever-the-optimist hope that the next one will be better. How much longer this series can continue is debatable. Like I said after Notorious Nineteen, I would love for Evanovich to take a risk and force Steph to make some real decisions, and bring back the crime element that made the first few so good.

Mortality (2012) was published shortly after author Christopher Hitchens’ death from cancer in December 2011. In this slender volume, Hitchens serves as correspondent from “Tumourtown” describing the ups and downs of his battle with cancer as he rages against the dying of the light. He begins with the diagnosis of cancer of the esophagus, a disease that claimed his father, and progresses through various treatments – chemotherapy, radiation – describing in detail the physical toll taken by this disease. While he is being treated he continues to live life as much as he can; keeping to engagements and documenting his illness in a series of articles for Vanity Fair.

One of the most powerful chapters is related to his voice and how he lost it during treatment. For an orator and storyteller, this was an unexpected blow.  He describes the human ability to “deploy vocal communication for sheer pleasure and recreation, combining it with our two other boasts of reason and humour to produce higher syntheses”.

Hitchens has long been my favourite writer and I greatly mourned his passing. When asked what I liked about his writings, I would recount the interesting topics, controversial views (of which I did not always agree) and his keen, subversive wit. In reading Mortality, Hitchens described precisely my thoughts when he wrote, “the most satisfying compliment a reader can pay is to tell me that he or she feels personally addressed.” I have always felt that reading Hitchens is like engaging in an engrossing conversation with an old friend. He was larger than life, and as I read, his voice comes through the page.

Having recently read Barbara Ehrenreich’s Smile or Die (2009), as I read Mortality I thought of the interesting conversations the two authors would have had together as they compared notes on cancer and the wellness industry. I imagine it would be a robust and raucous discussion.

Hitchens’ wife Carol Blue wrote a fitting afterword in which she described the loss of her husband. She states that Christopher always had the last word. Mortality is his last word, and one I will savour. 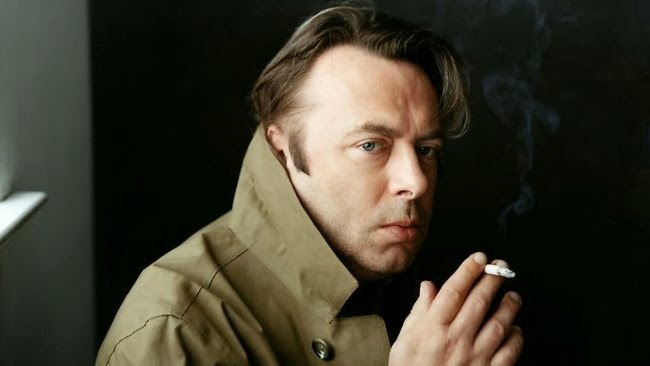