The 2020 Women's Prize longlist has been announced! The annual literary award celebrating women writers has previously recognised the talents of so many gifted writers, including these past winners:

On 3 March 2020, the longlist for this year's Women's Prize was announced with 16 nominees. I have a stack of these books at hand, and a couple of others on reserve from my local library. I look forward to exploring these titles.

Djinn Patrol on the Purple Line by Deepa Anappara

Deepa Anappara's debut novel is based on the high number of children who go missing in the slums of India. At the end of the purple metro line, nine year old Jai lives with his family. He becomes an amateur sleuth when his classmate goes missing, joining forces with two friends to investigate. As more children disappear, the three detectives may find these crimes lead too close to home. Written from the perspective of Jai, this sounds like a really interesting novel.

Fleishman is in Trouble by Taffy Brodesser-Akner
Fleishman has been on my list to read for months and this nomination serves as another reminder to hurry up and read! Toby Fleishman is recently separated after a thirteen year marriage and is now keen to play the field. But when his ex-wife disappears he needs to reflect on his role in the marriage. 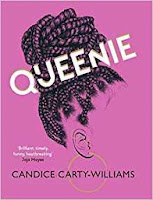 Queenie by Candice Carty-Williams
Queenie Jenkins is a 25 year old Jamaican-British woman living in London, straddling two cultures. She is at a low point, hating her job, at the end of a relationship, and struggling to reconcile her past. One bad choice after another leads Queenie on a quest for love, as she searches for meaning in the modern world.

Dominicana by Angie Cruz
On New Year's Day 1965, 15 year old Ana Canción marries and becomes Ana Ruiz, and leaves her home in the Dominican Republic to move to a cold New York City. She knows no one other than her husband, Juan, and knows there is no love in this marriage, but Juan is the pathway for her whole family to seek a new life in America. When political unrest back home forces Juan to return leaving Ana behind, she has a glimpse of other possibilities. But every choice involves a betrayal - of her mother or her husband.

Actress by Anne Enright
Norah is the daughter of actress Katherine O'Dell, the esteemed star of the Irish stage. Katherine's journey to stardom follows a familiar path - tough times on the local circuit, a big break in London's West End, followed by Broadway and then Hollywood. Norah stands in the wings, keenly observing it all. Later, as an adult, Norah seeks to understand her mother's hidden life. Enright previously won the Booker Prize for The Gathering (2007).

Girl, Woman, Other by Bernardine Evaristo
Winner of the Booker Prize 2019 for this novel, Evaristo's Girl, Woman, Other is the one to beat for this award. Following the lives of twelve different characters, this novel provides a history of the black British experience. In weaving this characters together, Evaristo explores themes of race, class, gender, sexuality and more. I am currently reading this book and marvel at Evaristo's writing.

Nightingale Point by Luan Goldie
In October 1992, a cargo plane crashed into two blocks of flats in Amsterdam, killing 40 people. Luan Goldie's novel was inspired by this incident. Set in 1996, the residents of Nightingale Point awake to an impending disaster. Told in third person from the points of view of various inhabitants, the story shifts in timeframe from before, during, and after the event. With the Grenfell Tower disaster still so raw, this novel is sure to bring to mind the parallels with this tragedy.

A Thousand Ships by Natalie Haynes
Continuing the trend of retelling of ancient tales from the perspectives of women, Haynes casts a feminist lens over the Trojan War. The main narrator is Calliope, muse of epic poetry. Women impacted by war - widows, mothers, girls, goddesses - who were mere passing references in the Iliad, take centre stage and share their untold stories. Having just read and loved Madeline Miller's Circe, this book is of great interest to me.

How We Disappeared by Jing-Jing Lee
Set in Singapore during the Japanese occupation, this novel tells the story of survival. It is 1942 and seventeen year old Wang Di is taken from her village to a Japanese military brothel, forced into sexual slavery for the invading troops. She is silent about all she endured for sixty years until she makes a deathbed confession to her grandson Kevin.

The Most Fun We Ever Had by Claire Lombardo
Marilyn and David have been blissfully in love for over forty years. Their four daughters, however, have not found that enduring love and each is unhappy in different ways. This dysfunctional family has its share of secrets, sibling rivalry, hidden resentments and unfulfilled desires. This is Lombardo's debut novel.

The Mirror and the Light by Hilary Mantel
Possibly the most anticipated book in publishing, Mantel concludes her historical trilogy of Wolf Hall and Bringing Up the Bodies with The Mirror and The Light. Beginning in May 1536 after the execution of Anne Boleyn, this volume explores Thomas Cromwell's final years. The culmination of 15 years' work, I am sure Mantel's novel will live up to the hype.

Girl by Edna O’Brien
Militants storm a girls' dormitory one night and abduct the young women. They are taken from their world, forced into rape, marriage and motherhood and terrorised. Using the 2014 Boko Haram kidnappings of 276 schoolgirls as her inspiration, O'Brien uses her incredibly versatile writing skills to tackle a difficult subject.

Hamnet by Maggie O’Farrell
Set in 1580s Stratford, Agnes and her her husband have three children. When their son Hamnet dies at eleven years of age, Agnes' husband writes a play called Hamlet. I love Maggie O'Farrell's writing and have had this book on my radar for months. This is quite a departure from her previous novels so I look forward to reading this novel.

Weather by Jenny Offill
Lizzie is a librarian at a university, married with one child, a drug-addicted brother, and a mother to care for. She is juggling so many things, plus overwhelmed by everything happening in the world.  Offill received high praise for her previous novel, Dept of Speculation (2014).

The Dutch House by Ann Patchett
Taking place over five decades, the Dutch House in the suburbs of Philadelphia was purchased by Cyril Conroy after WWII. Cyril's children Danny and Maeve grow up in this mansion until they are turfed out by their stepmother, forced got fend for themselves for the first time in their lives. Patchett is the award winning author of Commonwealth (2016) and Bel Canto (2001).

Red at the Bone by Jacqueline Woodson
In 2001, Melody is having her coming-of-age party as a sixteen year old in Brooklyn. She wears a dress made for her mother Iris, who was a pregnant sixteen year old at her own party.  Woodson's novel covers themes of race, class, family, mother-child relationships and more.


I have not read any of these titles yet, but have started Girl, Woman, Other, and have Queenie, Dutch House and Fleishman on deck read to go.

If I had to pick a shortlist, I would bet on Evaristo, Enright, Mantel, O'Brien, O'Farrell and Patchett. The shortlist will be announced on 22 April 2020 and the winner will be revealed on 3 June 2020. Happy reading!

The 2020 Stella Prize shortlist was announced on 6 March 2020, reducing the longlist of 12 titles, down to six: 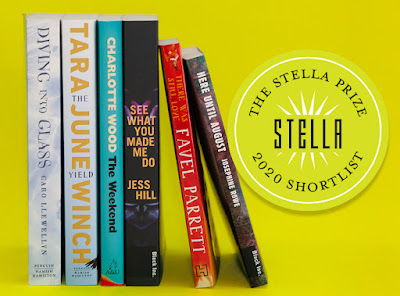 I have read the books by Rowe and Wood. Both brilliant, I would be delighted if either won. I reckon the other contender would be Jess Hill for her look at domestic and family violence, ever topical.

For more information, see my post on the longlist.

Postcards from the Edge

Here Until August (2019), Josephine Rowe's stunning collection of short stories, has been Longlisted for the Stella Prize. Over ten diverse tales, Rowe transports the reader around the globe to the Nullarbor, Montreal, the Snowy Mountains, the Catskills, and beyond. In these far flung locales, we meet characters at crossroads, trying to navigate the circumstances they find themselves in.

Relationships are central in all of these stories. 'Glisk' centres on two brothers who communicate in quotes from The Castle as they come to terms with their changing relationship. In 'Chavez' a French woman cares for a neighbour's dog as she hides from the world. A married couple have differing views on an ancient homemade sex tape in 'Post-Structuralism for Beginners'.  'Real Life', about a mis-matched couple in Montreal, reminded me of my university days, visiting friends studying at McGill and Concordia, with Rowe perfectly capturing student life and winter in Montreal.

Journeys feature in a number of stories. Two women set off on a honeymoon road trip across America in 'Anything Remarkable', not saying what needs to be said.  In 'Horse Latitudes' two friends travel  across the Nullarbor with an old Cardinal 'canned ham' trailer. While in 'A Small Cleared Space' a woman grieving the late-term loss of her unborn child travels to a remote outpost to spend a winter in isolation.

If I had to choose a favourite, it would likely be 'Sinkers', which takes place in a town flooded by a lake to make way for a hydroelectric dam. Christian returns to the lake to remember his late mother with a biscuit tin containing her ashes.

Rowe has an incredible eye for detail, capturing the nuances of time and place. Her language is precise and purposeful. She is an extraordinary talent and I am keen to seek out her novel A Loving, Faithful Animal which was longlisted for the 2017 Miles Franklin Award.
Posted by Ina Guddle at 11:32
Newer Posts Older Posts Home
Subscribe to: Posts (Atom)