The Vanishing Act of Esme Lennox (2006) by Scottish author Maggie O’Farrell is a powerful and intriguing novel about a stolen life. 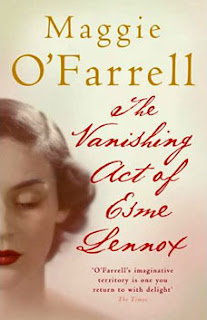 Esme Lennox was an unconventional girl in 1930s Edinburgh. She enjoyed reading and had a desire to attend University rather than attend balls and get married as was the ambition of most girls her age. Seemingly embarrassed by Esme's non-conformance, her family sought to erase her from memory. Her beloved sister Kitty colluded in the betrayal that resulted in Esme’s commitment to an asylum.

Sixty years later, Iris Lockhart, another unconventional woman, receives news that her great-aunt Esme is due for release. Iris begins to unravel the mystery of her great aunt who had never been spoken of in the family.

Told in brief snatches alternating from the past and present, Esme’s story unfolds in layers. Iris, Esme and Kitty (Iris’s grandmother who suffers from Alzheimer’s) provide their perspective on events. Like puzzle pieces, the fragments of the story come together gradually revealing the whole picture.

Maggie O'Farrell has such a compelling storyteller that the reader is drawn into the mysteries surrounding the women in the novel. Each of the three women have unique voices and contribute fascinating detail to the relationships between them.

Suspenseful, haunting and profoundly sad, this story of how Esme's life was taken from her will stick in your mind long after you have finished the book.