The first book I read by Ernest Hemingway was his 1951 novella The Old Man and The Sea.  I initially read it a number of years ago when I went through a phase of reading books with a nautical theme (Moby Dick, Master and Commander, Hornblower etc), since then however it is a book I tend to read annually. 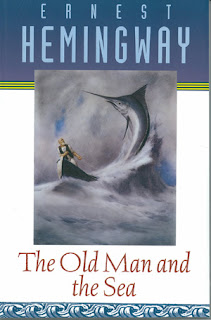 The story centres on the elderly fisherman Santiago and his battle to land a large Marlin. Each day Santiago and his assistant Manolin go out to sea, but for the last 84 days he has been unable to catch a fish. To change his luck, on day 85 Santiago goes to deeper waters alone, where a large marlin takes the bait at the end of his line. Santiago is unable to reel the fish in and for the next few days the man struggles against the fish. When the battle ends, Santiago returns home exhausted with the remains of the marlin strapped to his skiff.

What I love about The Old Man and the Sea is the simplicity of the story. Hemingway has cut out all the guff, and focussed on telling a straightforward tale of man vs beast. Santiago is an interesting character of whom Hemingway writes, “Everything about him was old except his eyes and they were the same color as the sea and were cheerful and undefeated.”

Hemingway uses punctuation sparsely, which takes some getting used to, and his dialogue is uncomplicated, almost simplistic. The way Santiago struggles against his own weaknesses and has respect for his catch is beautifully written.  Santiago understands the sea, it has been his livelihood and his home all his life. 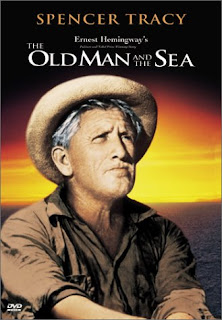 Fishing has never appealed to me as a recreational activity or sport. I would not have the patience to sit calmly and wait for a nibble on my line. For this reason, I had expected that the story would be dull and that I would be thankful that it is such a short novella. But I was surprised to find the story to be so engaging. I would recommend setting aside an hour or so to read the book in one sitting.

Hemingway won the Pulitzer Prize in 1952 for The Old Man and the Sea, and when he won the Nobel Prize for Literature in 1954.

It was made into a movie in 1958 starring Spencer Tracey as Santiago. I have not seen it, but cannot imagine that it would reach the depths of meaning in the book.
Posted by Ina Guddle at 14:23
Newer Post Older Post Home