Have a Nice Day!

American writer Barbara Ehrenreich wrote Smile of Die: How Positive Thinking Fooled America and the World (2009) in response to the multi-billion dollar industry promoting the notion that positive thinking can cure what ails you. 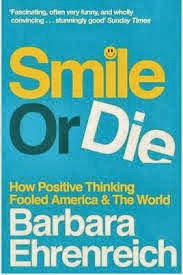 When she was diagnosed with breast cancer, Ehrenreich became frustrated by continually being told during her treatment and recovery that attitude was the key to her survival. From the pink products and positive affirmations, to putting on a brave face for loved ones and survivor stories, there was an expectation that patients must see illness as an opportunity and have the right attitude to get well.

Sceptical of the guff surrounding thinking your way to wellness, Ehrenreich set out to explore the origins of this new thinking from the 19th century response to Calvinism though to motivational speakers, self-help gurus, spiritual advisers, and get-rich-quick schemes. She discovered that Americans have whole-heartedly bought in to the belief that you can visualise health, wealth and happiness. All it takes to attain your desires is thinking yourself in a new situation.

While on the surface this seems like a great idea - an easy way to imagine success without putting in much effort - what happens when things go wrong? Clearly, you must have attracted the bad things that happened to you and therefore deserved them. The cult of positive thinking would have you believing that it is your fault because you didn't pray enough or failed to be sufficiently optimistic.

Smile or Die is a well-researched, though-provoking and powerful critique. Ehrenreich's humour balances her skepticism. Ultimately I found it a refreshing alternative to the fortune cookie wisdom and empty platitudes spruiked by so many business books and self-improvement tomes.

In America Ehrenreich's book was published as Bright-Sided: How Positive thinking is Undermining America (2009). Sounds like a more positive title for the American market!
Posted by Ina Guddle at 15:58
Newer Post Older Post Home