In 2013 a new literary award was created in Australia - The Stella Prize - named after one of my favourite authors Stella Miles Franklin. The Stella Prize aims to recognise Australian women writers of fiction and non-fiction and their contribution to literature. The $50,000 prize helps the writer individually, while the prize collectively increases awareness of female authors.

The award was created as a women-only prize because women are dramatically underrepresented in Australia's other literary awards - like the Miles Franklin Award and the Premiers Literary Awards. What's more, the creators of the award discovered female underrepresentation in book reviews and book reviewers, and an overall lack of promotion of women writers.

The first Stella was awarded in 2013 to Carrie Tiffany's novel Mateship with Birds (2012) which is set in rural Victoria in the 1950s. I have not yet read this book, but it is on my reading list.

The following year, the 2014 prize was awarded to historian Claire Wright for her non-fiction account The Forgotten Rebels of Eureka (2013) - the story of women on the goldfields of Victoria in the 1850s. My mother has read this book and thoroughly enjoyed it and it is on my To-Be-Read list.

The 2015 Stella Award featured an interesting shortlist which consisted of: 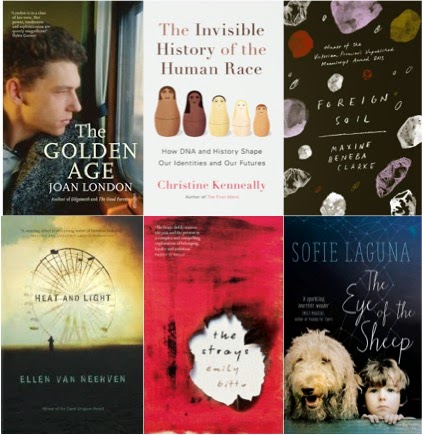 Other than Joan London, I had not heard of these other books or authors, The Stella Prize has brought them to prominence, exposing me and many other readers to new works. Of these, Bitto's The Strays (2014) is the one that most interests me, while Kenneally's book may appeal to my mother's interest in genealogy.

This year's award was announced in Melbourne on 21 April. The winner is: Emily Bitto's The Strays.  (Update: read October 2015 - see review)

This is Bitto's first novel and it is about families and friendship. Only child, eight year old Lily meets a new friend, Eva, at school. Eva has grown up in a large artistic family, in stark contrast to Lily's more conventional upbringing. The Stella Prize judging panel likened this book to Ian McEwan's Atonement or AS Byatt's The Children's Book... so it sounds like it would be well worth the read.