George Megalogenis is an award winning journalist with a keen understanding of economics and politics. In his recent Quarterly Essay (QE61) Balancing Act: Australia Between Recession and Renewal (2016), he explores the transition our nation is in at the end of the mining boom. 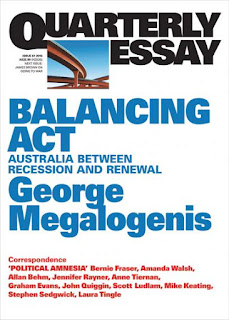 There is a sense of urgency in this important essay as Australia is at a crossroads. After a period of unprecedented economic growth due to a mining boom, the pendulum is now swinging in the opposite direction as our resources are no longer what they once were. During the good times, taxes were cut, wages were high, and the nation was prosperous. However, we did not take advantage of our luck and invest in infrastructure (road, rail, ports, broadband) and public education to prepare ourselves for what comes next.

Megalogenis argues that the old economic model, which worked in the past, is not suitable for the future. Today politicians are so poll-driven that they will not make the tough decisions needed to move forward and have a short term mindset which limits their vision. His critique of both Rudd and Abbott is razor sharp as he writes:  "The fulfilment of ambition, and the responsibility of government was supposed to turn Abbott and Rudd into statesmen. Instead, success made them unaccountable."

Prime Minister Turnbull often states that 'there has never been a more exciting time to be an Australian' and in many respects this is true. But his optimism may be misplaced if there is no plan for the future. Megalogenis is concerned about the prospect of a recession, for which we are unprepared having relied so much on luck. He argues that change is needed - with high household debts, low wage growth, inflated home values - in the form of increased government spending and regulation.

Megalogenis suggests that the government take advantage of low interest rates to borrow funds to invest in infrastructure - that will bring blue-collar jobs and prepare us for the necessary population growth through immigration. He also makes a passionate plea for public education. But he is concerned that our political system is not ready. He writes "the difficulty for Turnbull, indeed for the entire system, is that too much is expected of the prime minister. The rhythm of politics today is the permanent volatility of the financial market."

This Quarterly Essay follows on from the previous essay (QE60) by Laura Tingle on  Political Amnesia and there is a definite theme in the cumulative weight of the essays. There is a desperate need to overcome the short-termism of political leadership. In the midst of the current election campaign, these essays are vitally urgent. I can only hope that the electorate will think not of themselves on election day, but on the future generations who will be impacted by the decisions of those we charge with making decisions about our nations future.
Posted by Ina Guddle at 07:44
Newer Post Older Post Home