The latest Quarterly Essay (QE62) Firing Line - Australia's Path to War (2016) is focussed on war: how does Australia decide to go to war, where might the next conflict arise, and how prepared (or not) our nation is for any armed conflict. 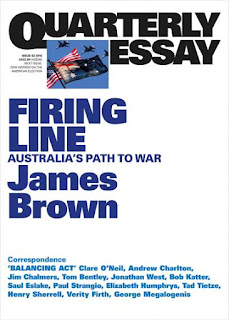 Australia is far from hot zones, but close to conflict. China is terraforming in the seas to our North, the US has troops stationed on our continent, and our country has been quick to follow our allies into conflict with little public debate. The effects of global conflict are very real for Australia and informs our policy on refugees, defence, anti-terrorism, border security and the like.

The Chilcot Report has just been released, damning Britain's Blair government for entering the Iraq War without exhausting diplomatic options, and then engaging in war without effective support, planing or post-conflict strategy. This report has seen Australian PM John Howard defending his legacy and a renewed focus on how we make decisions to go to war.

In this thought provoking essay, author James Brown, former Army Officer and now lecturer at the University of Sydney, explores on Australia's readiness for war. He rattles off statistics and strategies about available troops and equipment and concludes that we are not ready for any sort of prolonged engagement. Further, we are making decisions without thinking through the consequences (e.g. leasing Darwin port to China) and becoming increasingly isolationist.

Brown also explores the way in which decisions to engage in conflict are made by an increasingly small circle of players. Brown encourages all Australians to consider what are we willing to fight for, who should make decisions for us, and to be more alert to what is happening in our region.