One of the absolute highlights of this year has been meeting Gloria Steinem. She has long been one of my heroes, ever since I began reading Ms Magazine as a teenager. I heard her speak in May at the Sydney Writers Festival, and met her when she signed a copy of her latest book, My Life on the Road (2016). 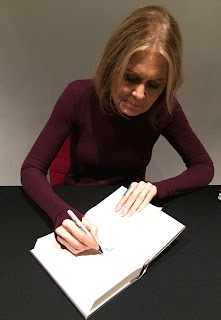 This memoir is a series of snippets from her various travels - across America and around the world. Along the way she has met some remarkable people and learned a great deal about herself and the world around her.  For example, she describes in great detail many of the interesting journeys she has had and things she learned in taxis.

She begins with her nomadic childhood as her father packed up the family after a few months at home, and they travelled across the country stopping at roadside stalls and antique dealers. Buying and selling goods to make a living, her parents never really settled in one location. It wasn't until she was 10 or so, after her parents had separated, that Gloria moved into a rental house. 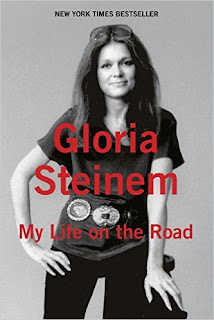 While she inherited her wandering from her father, her inquisitive, journalistic nature came from her mother. Gloria moved to New York and became 'girl reporter'. She covered many key events in American history - Martin Luther King's "I have a dream" speech in Washington, travelling with Robert Kennedy's campaign - and became an organiser, the occupation that she continues today.

Steinem writes of how she came to feminism, her involvement in the US women's movement, and her fervent belief that race, class and gender are intricately intertwined. Her passion seeps out of  every word, and reminds the reader of the importance of taking a stand.

This is not a chronological memoir. It is a love letter to travel and a message of thanks to those who have influenced her life. I particularly loved her depiction of her relationship with indigenous activist Wilma Mankiller. Steinem is a passionate advocate of first nations, and her respect and empathy for indigenous women is ever-present.

This inspirational memoir is easy to read, as if being told travel stories from a dear friend. It is an interesting approach to memoir, as a collection of memories stung together in loose chapters. I came away from this book desperate to travel again, to experience life on the road, and to make a difference to those causes I am most passionate about.
Posted by Ina Guddle at 13:31
Newer Post Older Post Home