It would come as no surprise to anyone that I am more than a little obsessed with Star Wars. My brother and I grew up with the characters, would act out scenes verbatim, and spent many Halloweens dressed as Vader, Yoda, and the gang. Princess Leia Organa has always been my hero and I admired her qualities: she is smart, sassy, and driven. A Princess who didn't need to be rescued. A General who motivates and maintains the Resistance. A role model for girls and women everywhere.

When Carrie Fisher passed away suddenly in December 2016, I mourned her greatly. 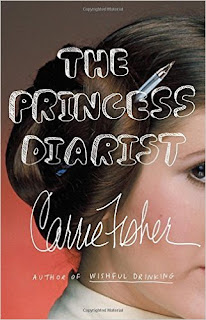 Fortunately she has left behind her work. While she is most known as an actor, Fisher is also a writer. Her latest book, The Princess Diarist (2016), is based on the journals she kept while making the original film in London in 1976. Carrie Fisher was only nineteen at the time and one of few women on the set. She and (married-with-children) Harrison Ford had a brief affair which is documented in these diaries.

But "Carrison" is no tale of romance. This is a much older man, aloof, uncommunicative and disinterested, engaged in a relationship with a young, inexperienced, naive woman. She wants more from him, imagining a life they may have, while he knows it will only last as long as the three-month shoot does.

The first part of the book is about Fisher gaining the role - auditioning, choosing the "Buns of Navarone" hairdo, her relationship with famous parents Eddie Fisher and Debbie Reynolds. Fisher is self-depreciating, witty and open.

The second part is an extract from the diaries. I was impressed by the poetry Fisher had written - aching, raw, humourous - about Ford, and surprised there was so much of it. I had expected more set anecdotes and insight into the filming, but clearly she was obsessed with Ford and could write of nothing else.

The last third of the book was a bit disappointing. She recounts various encounters with fans, and bemoans their love of Leia and unwillingness to see Carrie beneath. She begrudges the lack of money she earned from Star Wars (having signed away merchandising rights) and the humiliation of having to show up and sign autographs at fan festivals. She writes this section from the present, aged sixty, reflecting on her past and the character that has set the trajectory for her life.

I must admit that I read this book with twinges of sadness. There were moments where she talks of her legacy and what people will think after she is gone. I will remember her as Leia of course, but she is forever Carrie - a wonderfully complex, wise and witty woman, a talented writer and a tireless campaigner for mental health.

Vale Carrie Fisher. May the Force be with you.
Posted by Ina Guddle at 06:00
Newer Post Older Post Home