The 2017 Man Booker prize winner was announced this week. From the thirteen titles on the longlist, to the six on the shortlist, the judges have now chosen the one book that would take home the prize.

American writer George Saunders won for his first novel, Lincoln in the Bardo, a story focussed on one night when Abraham Lincoln buries his 11 year old son. The graveyard is filled with souls not yet fully transitioned who reside in the bardo between death and rebirth. 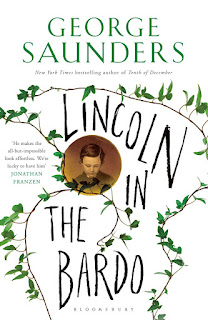 The chair of the judges, Lola, Baroness Young said:


"The form and style of this utterly original novel, reveals a witty, intelligent, and deeply moving narrative. This tale of the haunting and haunted souls in the afterlife of Abraham Lincoln’s young son paradoxically creates a vivid and lively evocation of the characters that populate this other world.  Lincoln in the Bardo is both rooted in, and plays with history, and explores the meaning and experience of empathy."

I am so pleased this book won as I expected it would. From the first few pages, I knew there was something remarkable about it. Will write a full review on this novel shortly.

Of interest, this is the second American winner in a row, after the eligibility criteria was changed in 2014 to allow writers from outside the Commonwealth. I imagine with Paul Beatty last year and George Saunders this year, there will be plenty of British writers concerned about the widening pool of talent and wishing it were constrained once more.
Posted by Ina Guddle at 06:38
Newer Post Older Post Home