Mohsin Hamid's novel Exit West (2017) was shortlisted for last year's Booker Prize. It is the story of Nadia and Saeed, two young lovers who seek to escape the war in their homeland. 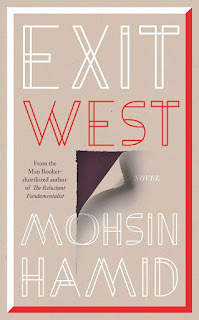 Nadia is independent and open-minded, living on her own in a country where women's rights are becoming increasingly curtailed. She meets Saeed at night school and they begin a relationship. As the violence escalates and parts of their city become uninhabitable, Nadia moves in with Saeed and his family. Rumours start to form about secret doors which will take you away, to a new location and a new life.

Saeed and Nadia find a broker who will help them to a door. Leaving behind all they know and love, with just a small bag of provisions and their memories, they venture into the unknown. But the world is not always welcoming to strangers seeking shelter...

I really loved Hamid's eloquent writing in this novel. It has a fable-like quality to it, while providing gems like "their phones rested screens-down between them, like the weapons of desperadoes at a parley" and "when we migrate, we murder from our lives those we leave behind". I was curious about Hamid's long, meandering sentences in some parts, such as when Saeed's father encourages them to leave and the string of words rolls on. But he is an expert storyteller, and I was mesmerised by his writing from beginning to end.

About the magical realism... I must admit I was really skeptical about the magical, transporting doors device. Doors could appear in wardrobes and cupboards anywhere and one might take you to Sydney or San Francisco, another to Kabul. I kept thinking about how the tourism industry would respond to these doors - would the airlines collapse or would they capitalise? But these portals aren't the point, the people are. This novel comes about when doors are closing to refugees worldwide, and people are so desperate to survive they will do anything they can to find safety.

This is a timely, urgent book. It is very short and can be read quite quickly, but the impact will linger long after you have finished reading.