The Man Booker Prize for fiction was announced on 16 October 2018. From a Longlist of 13 titles and a Shortlist of five, Anna Burns was the winner of the 50,000GBP for Milkman. 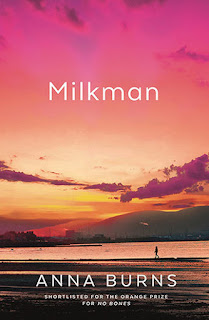 This win returns the prize to the Commonwealth as, after three consecutive years of being won by American men, a woman from Northern Ireland has claimed victory. It has also been five years since a woman last won the prize, when Eleanor Catton won for The Luminaries in 2013.

Set in Belfast in the 1970s, during the Troubles, Milkman is a stream of consciousness story narrated by an 18 year old woman, middle sister, who is rumoured to be having an affair with a person known only as the Milkman. The novel explores truth and gossip, with a unique writing style.


None of us has ever read anything like this before. Anna Burns' utterly distinctive voice challenges conventional thinking and form in surprising and immersive prose. It is the story of brutality, sexual encroachment and resistance threaded with mordant humour. Set in a society divided against itself, Milkman explores the insidious forms oppression can take in everyday life.

The book has seen sales increase dramatically since the award was announced. Publisher Faber & Faber must be delighted.
Posted by Ina Guddle at 13:00
Newer Post Older Post Home