Last year when the Booker Prize longlist was announced, Belinda Bauer was named for her crime thriller Snap (2018). Before the nomination, I had not heard of Bauer despite her success as a writer of eight crime novels. Upon recommendation of my aunt, I sought it out and have spent the past few days engrossed in this tale. 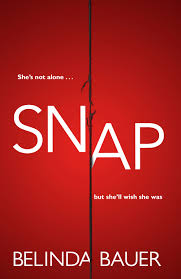 Eileen Bright's car breaks down on a motorway. She leaves her three young children in the vehicle and goes off in search of an emergency phone and is never seen again. Her disappearance and subsequent murder breaks the Bright family as dad is unable to cope with the loss of his pregnant wife, leaving his eldest child Jack to be assume responsibility for his younger siblings.

Three years later, a spate of house burglaries are frustrating the local police, unable to catch the robber they have named 'Goldilocks'. And one night, pregnant Catherine While disturbs an intruder who leaves her a threatening note. Could this be Goldilocks? Could it be same the perpetrator that killed Eileen?

Enter Detective Marvel and his crew of investigators who, in searching for Goldilocks, may have found the clues to solve the Bright cold case.

Bauer has an insightful, empathetic way of writing about the Bright children and the trauma they experienced. She has crafted a tale that weaves together a string of coincidences to slowly reveal the full picture. There were some parts where credulity is strained - such as Detective Reynolds' frequent bumbling and Catherine's unwillingness to get police involved - but for the most part it is an entertaining read. I wish she had not given a character a surname of While as it occasionally made it confusing to read. But I really enjoyed Snap and will seek out Bauer's other novels.

However, I am surprised that it was nominated for the Booker. Thrillers generally don't get nominated for that literary prize and I am confident that there would be much better representations of the genre published last year (Rankin, Galbraith, Winslow etc).
Posted by Ina Guddle at 08:39
Newer Post Older Post Home