The Tattooist of Auschwitz is Heather Morris' bestselling novel is based on the true story of a survivor of the Holocaust. It is a simply written love story that can be read quickly, so it is easy to see why it has been optioned for film and is popular with book clubs. 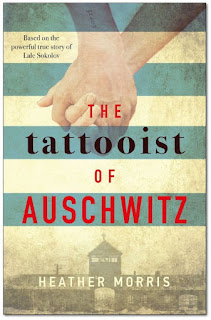 Lale Sokolov, a Slovakian Jew, was transported to Auschwitz and Birkenau in April 1942. His intelligence and ability to speak numerous languages made him a valuable asset to his captors. Lale was put to work as the tattooist, inking numbers into the forearms of his fellow prisoners. In exchange he was given certain privileges, like food rations and better accomodation, but he remained a prisoner nonetheless and always needed to be aware that one false step could result in torture or death.

One day, Lale tattoos a young woman named Gita and he falls in love at first sight. His passion for Gita compels him to survive the war and be with his love. The lengths he will go to in order to protect Gita and find some happiness in the most dire of circumstances is what has made the book a popular novel.

I have a keen interest in history and have spent time learning about the Holocaust, travelling to Auschwitz and Birkenau, and visiting Jewish history museums in Berlin, Warsaw, Krakow, Vienna, Prague, and Budapest. It is essential that the stories of those who lived through the terrors of the second World War are told, especially as we are nearing a time when there will be no one left who can give a first-hand account.


Which is perhaps why Morris' book troubled me. In spinning a tale of romance and survival, I believe Morris has done a disservice to Sokolov, watering down the horrors of war and crafting some truly terrible dialogue. Morris has faced some criticism for the artistic license she has taken in telling Sokolov's story. She makes it clear that this is a fictionalised account, so this criticism doesn't bother me as much as the poor writing. Perhaps in the hands of a better writer, Sokolov's tale would have been more compelling.

There are certainly much better works exploring the war - both fiction and non-fiction - which are much better written. I would recommend Anne Frank's Diary of a Young Girl, Elie Wiesel's Night, Bernhard Schlink's The Reader, Thomas Keneally's Schindler's Ark, and Irene Nemirovsky's Suite Francaise, to name a few. I would recommend skipping Morris' novel and picking up one of these titles instead.
Posted by Ina Guddle at 14:57
Newer Post Older Post Home