Evelyn Waugh’s A Handful of Dust (1934) is a biting satire exploring the shallowness and hypocrisy of the upper class in the inter-war years. 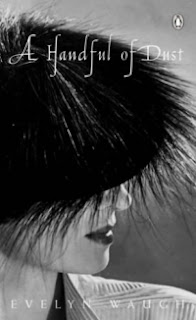 A Last family tragedy is the catalyst for divorce. Despite having been cuckolded, Tony agrees to be the guilty party and manufactures evidence of his infidelity. Selfishly Brenda presses Tony for a larger settlement knowing he will have to surrender his beloved Hetton Abbey to pay for her preferred standard of living.

Refusing Brenda’s demands Tony flees to Brazil on expedition. When he becomes ill, the mysterious Mr Todd nurses him back to health. Todd then holds Tony captive and forces him to read aloud the collected works of Dickens.

The title of the book comes from a line in the T.S. Eliot poem The Waste Land (1922) that reads:
I will show you something different from either
Your shadow at morning striding behind you
Or your shadow at evening rising to meet you;
I will show you fear in a handful of dust

Waugh holds a mirror up to society to ruthlessly show the debris that remains when morals are lost. The characters are vain, self-interested and unsympathetic. The bleakness of the subject matter is lightened by Waugh’s quick and scathing wit. The comic dialogue and absurdity of certain scenes (such as Tony’s seaside trip or his feverish delusions) demonstrate Waugh’s abilities as a writer.

I loved this tragicomic novel and even prefer it to the more popular Brideshead Revisited (1945). This is a masterpiece of British writing and I recommend it highly.
Posted by Ina Guddle at 17:33
Newer Post Older Post Home