After having read Bob Woodward's Fear: Trump in the White House late last year, I swore I would not read another book about the failings of the President. In fact, I have tried to distance myself from all things Trump - unsubscribing to podcasts and avoiding other books that explore his terrible reign. I find Trump so odious, distasteful and ignorant, that my blood boils each time I hear him speak or his name mentioned. As such, I was surprised to find myself reading another book about the Trump Presidency while on holidays last month. 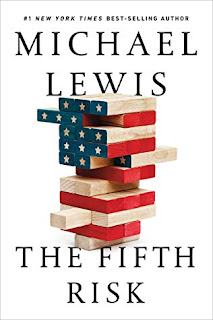 Michael Lewis' The Fifth Risk (2018) contains little of Trump himself, but instead focuses on the transition period between the Obama and Trump administrations. It is a fascinating portrait of how government works and the important role that the bureaucracy plays in all aspects of American lives. The book celebrates public servants, toiling away in anonymity on essential services and wicked challenges. It is also a reminder of how important it is for citizens to understand how their government works.

Lewis interviews John MacWilliams, employed in the Obama years as a senior advisor to the Secretary of the Department of Energy. MacWilliams declares that the top five risks facing America are: nuclear weapon accidents (known as "Broken Arrows"); North Korea; and nuclear Iran; cyberterrorism in the electricity grid; and, project management.

The fifth risk sounds ill fitting with those that came before, but as Lewis' book unfolds it is absolutely correct. As he explores the transition in three key government departments - Agriculture, Commerce and Energy -  Lewis sees the failure of project management first hand. The incoming government is so partisan, so driven by a narrow agenda, and so ignorant as to the role these departments play, that they cut budgets for essential programs, make poor appointments to top jobs and ignore the advice of experts.

Long term problems (like what to do with nuclear waste) are ignored, as the new administration sought short term solutions. They cut budgets to key agencies - for example, not understanding that the Department of Agriculture plays a crucial role in regulating food safety and the provision of food stamps for the poor.

I was fascinated by the depiction of the National Weather Service, which has used advanced data collection, science and technology to improve weather predictions, thereby saving lives. The whole point of the service is to provide free, accurate advice to the public so citizens make informed decisions.  Trump then appoints Barry Myers, the CEO and owner of AccuWeather, a commercial weather service that has profited from the free data of the National Weather Service, to be the head of the National Oceanic and Atmospheric Administration (NOAA) with disastrous results. For a brief summary of this issue, see former NOAA administrator Jane Lubchenco's opinion piece in the New York Times on Myers nomination.

The Fifth Risk is a quick and compelling read, providing insight into the important role of government agencies and the need for comprehensive project management in all areas of business.
Posted by Ina Guddle at 16:22
Newer Post Older Post Home