A Confederacy of Dunces

US Secretary of Defence General Jim Mattis resigned his position in the Trump government on 20 December 2018.  In his very public resignation letter he stated unequivocally that


"... our strength as a nation is inextricably linked to the strength of our unique and comprehensive systems of alliances and partnerships. While the US remains the indispensable nation in the free world, we cannot protect our interests or serve that role effectively without maintaining strong alliances and showing respect to those allies."

Mattis' resignation came shortly after President Trump unilaterally decided to withdraw American troops from Syria, against the advice of the military - leaving civilians and allies in great danger. 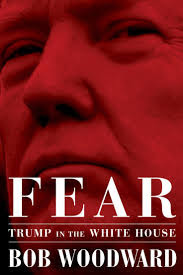 The departure of Mattis did not surprise me, as that exact same day I had just finished reading Bob Woodward's 'fly-on-the-wall' expose, Fear: Trump in the White House (2018). An extreme nationalist, Trump is a protectionist and has increasingly isolated himself from his allies. He has torn up trade deals and the Iran Nuclear Agreement, backed out of the Paris Climate Accord, imprisoned immigrant children, aligned himself with dictators, threatened NATO, and attempted to build a literal wall. Trump believes power equates to fear, and he has set about disrupting all norms to keep the world on edge.

Award winning journalist Woodward has managed to gain access deep within the White House and spoken with many named and unnamed sources including Gary Cohn, Rob Porter, Reince Priebus and Steve Bannon. Through these contacts Woodward paints a terrifying picture of the President as an illiterate, ill-informed, hate-filled, vengeful bully.

As a keen follower of global politics, much of Fear was already known to me. But what I found astounding was the lengths some of the President's men would go to in an effort to tame or circumvent Trump. Documents requiring signing were removed from the President's desk, aides slowed down his agenda by delaying his orders, secret meetings were held, memoranda was written to appeal to Trump's ego, and the gatekeepers tried to limit his access to people who would fuel his worst instincts. Trump's contempt for those around him, the way he belittles and publicly humiliates those he relies on, is appalling. With the departure of Mattis, Kelly, Tillerson and more, I am worried that there will be no one left to temper his idiocy; Trump is now surrounded by yes-men who cannot constrain him.

Ultimately, I believe it is Trump who is afraid. The Mueller investigation is tightening around him. His family is under the spotlight and his corrupt Foundation has just been disbanded. He is fighting countless lawsuits and many of his former partners in crime are now corroborating with authorities. With all of these personal attacks, he rages on Twitter to distract and debase. I wonder how far Trump's narcissism goes and whether deep down he knows he is temperamentally unfit for the office he holds.

Fear is just one of dozens of books about Trump's Presidency, and undoubtedly dozens more will be written before his tenure is out. I found Fear to be well written and interesting, but in reading it I couldn't help but feeling great fear for the downfall of the office of the President, the decline of America, and the danger of our world.
Posted by Ina Guddle at 09:45
Newer Post Older Post Home