Tales from the Crypt

Each year I give my two nieces, currently aged 8 and 11, books as Christmas gifts. I enjoy trying to track down books that I think they may enjoy - from graphic novels like Phoebe and her Unicorn, to classics like Anne of Green Gables. I try to do my homework to make sure they are age appropriate and, wherever possible, I try to read the book in advance. This year I gave them:


I managed to read Gaiman's book before the holidays and think it will be greatly enjoyed by the recipients. 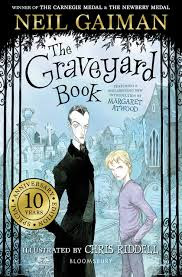 The Graveyard Book (2008) begins with a scary, dark scene in which a knife-weilding man enters a family home and kills all inside except an infant boy who has escaped from the home and wandered into a local graveyard. The dead shelter the boy and two of the ghosts adopt him and name him Nobody Owens, Bod for short. Silas, a groundskeeper of sorts, becomes his guardian and teaches him ghostly behaviour like fading, haunting and dream walking. Bod is told never to leave the graveyard and as such gets about exploring the crypts and tombs, meeting all sorts of undead.

As the years go by, Bod grows older and he longs to move beyond the cemetery gates. He befriends a young girl named Scarlett who visits the graveyard, journeys out to the centre of town, and later he attends a local school. But the best lessons are the ones he learns from the ancient inhabitants of the graveyard.

What I particularly liked was that each chapter is a self-contained story, which makes for perfect bedtime reading. I also enjoyed the way each new ghostly character was introduced via what was written on their headstones ('Traveler Lay Down Thy Staff'). This is an enchanting book, with a fine balance of darkness and light.

The Graveyard Book won a stack of awards including the Carnegie Medal (UK) and  Newberry Medal (US) for the best children's book.
Posted by Ina Guddle at 08:20
Newer Post Older Post Home