As a fan of the HBO series True Blood, to fill the gap between the airing of seasons 3 and 4 I commenced reading the first two Sookie Stackhouse novels by Charlaine Harris, on which the television series is based. 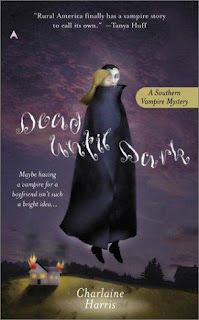 With the invention of a mass produced synthetic blood product, vampires no longer need to feed on humans. Seemingly less threatening, vampires have ‘come out’ and are attempting to assert their political and civil rights. While feared by people who do not wish to associate with the undead, they hold a seductive allure to others known as fang bangers.

The central character is the sassy, straight talking, waitress Sookie Stackhouse. She is a telepath who hears the thoughts of those around her. Sookie is in love with local vampire and civil war veteran Bill Compton.  She also has other men in her life like her goofy brother Jason, shape-shifting boss Sam, and Bill’s main rival, vampire Eric Northman. 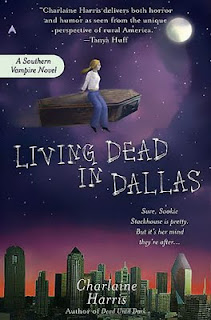 Part romance, part fantasy, these are also mystery books collectively known as the Southern Vampire Mystery series. Sookie puts her telepathic skills to work as amateur detective. The first two books of the series, Dead Until Dark (2001) and Living Dead in Dallas (2002), see Sookie using her telepathy to identify a serial killer in Bon Temps and infiltrate the anti-vampire religious cult, Fellowship of the Sun.

There are problems with pacing in the books and the number of characters can often be overwhelming. But Harris' dialogue is excellent - quick, witty, and dry – and her humour matches her story telling abilities.

The novels, while entertaining and engaging in their own right, left me feeling even more impressed with the True Blood television series. Creator Alan Ball has taken elements of the various books and woven them across the seasons so it is not a novel-by-novel adaptation. This allows for appreciation of both the books and television series without spoilers. In fact while the books made me admire the TV series more, the TV series encouraged greater enjoyment of the books. I cannot wait to see/read what happens next in Bon Temps.


My review of the third novel in this series, Club Dead (2003), is also available on this blog.
Posted by Ina Guddle at 12:14
Newer Post Older Post Home