In need of a tailor, a soldier and a spy

Paul Harding won the Pulitzer Prize for Literature in 2010 for his debut novel Tinkers. The quote snipets on the cover tell me that this book is 'remarkable', 'hypnotic', 'beautifully realised', 'magical' and that I should 'prepare to be seduced'. So with this in mind, I commenced reading this compact tale about a dying man's reflection on life. 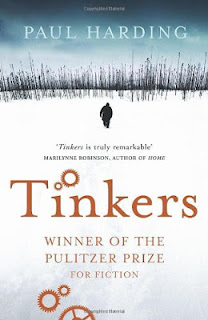 George Washington Crosby is dying and over the course of his last eight days of life he drifts in and out of consciousness to interact with the loved ones at his bedside. Crosby is a repairer of clocks, the son of tinker/salesman Howard. Crosby's disjointed memories take him back to think about his dad. This is not a chronological story, but rather ebbs and flows like memory, with shifting points of view.

There are moments of real tenderness and humour in Tinkers. I particularly enjoyed the novel when it shifted to Howard during his days as a travelling salesman in Maine in the 1920s. He meets interesting characters along the way, including a hermit with a sore tooth whom Howard assists.

Harding's novel had been rejected by many publishers before being released, and I can see why. The high-falutin language screams 'literary' but the novel lacks a compelling story. While some passages are lyrical and poetic, the pace is so slow that it is difficult to engage with the storyline. In many ways it seems like a collection of poetic passeges woven together with a loose plot as an afterthought. It may have been better as a short story or a series of vignettes.

Since completing the book I have read other reviews and it seems to have a polarising effect on readers: they either love it or hate it. I was prepared to be seduced, mesmerised by Harding's hypnotic tale but I am afraid the book made no solid impact on me at all. Perhaps the'deep and meaningful' aspects of the novel were lost on me, but I felt it was rather pretentious. I would not rush out to read Harding's next novel, but I would be interested in his poetry.
Posted by Ina Guddle at 00:00
Newer Post Older Post Home