Fighting for their lives (updated) 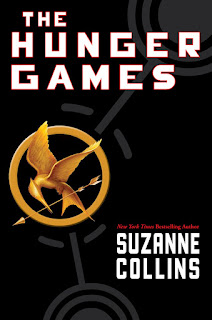 The Hunger Games (2008) by Suzanne Collins is extremely popular at the moment due to the recent release of a film based on the book. I knew little about the book before I read it, except that it was written for young adults, it was set in a dystopian future, and it was the subject of a major motion picture. But my curiousity and love of dystopian sci-fi lead me to put the trilogy on my e-reader and I devoured the story over a couple of train trips during my travels.

Sixteen year old Katniss Everdeen lives with her mother and sister in District 12 of the post-apocolyptic Panem. She spends her days illegally hunting with her friend Gale, trying to gather enough food for their families to survive. Each year the Hunger Games are held, in which a girl and a boy from each of the twelve districts are chosen by lottery to participate. These games are a televised battle to the death and serve as a reminder to the people of the Districts not to attempt rebellion against the Capitol.

Katniss becomes the 'tribute' from District 12 and must fight to survive in the arena against 23 other children, in a physically and psychologically brutal entertainment for the elite in the Capitol. Told by Katniss in the first person, the novel explores her  life at home, her preparation and training for the Games, and her time in the arena. To say more would spoil the story...

There are a number of interesting minor characters who have important roles to play: Katniss' mentor, Haymitch Abernathy, a former Games winner from District 12; Rue, the tribute from District 11; Effie Trinket, the escort for tributes from District 12; Cinna, Katniss' stylist and friend; and Caesar Flickman, the host of the Hunger Games.

While the novel is far from literary it is a page-turner that will appeal to the young adult market to whom it is aimed (and to the young-at-heart). Collins describes the violence and action in a compelling way and creates an interesting heroine in Katniss. Less convincing is her depiction of the love-triangle, but it will generate interest for younger readers.

Collins has created a fascinating universe in Panem which will be explored further in the two other novels of this trilogy: Catching Fire (2009) and Mockingjay (2010). I have almost finished reading Catching Fire and thoroughly enjoying my time in Collins' imaginary world.

The Hunger Games (2012) film stars the talented Jennifer Lawrence as Katniss, Liam Hemsworth, Woody Harrelson, Elizabeth Banks, Josh Hutcherson, Stanley Tucci, Lenny Kravitz and Donald Sutherland. It was directed by Gary Ross and has set many box office records. I have yet to see the film but will update this blog with my thoughts once I have seen it. 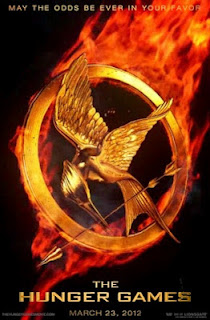 I have now seen the film of The Hunger Games and I have mixed feelings about it. For the most part I enjoyed it, but I felt that it was somewhat watered down, perhaps to lower the rating and allow for a bigger audience. This made the picture a lot slower and less engrossing than the book. The viewer never really gets the sense of Katniss' horror and distress, losing much of the psychological impact and immediacy of the story. There were some minor differences between the book and the film which were puzzling and distracting. Some  I imagine were made to cut out minor characters and perhaps speed up the narrative, but others were unnecessary and may have an impact in later films. The casting was good, particularly Jennifer Lawrence, who is a wonderful actress. I look forward to the next installment of the film franchise, but wish it were stronger and followed the book more closely.

See also my reviews of the other books in this trilogy: Catching Fire; and Mockingjay.
Posted by Ina Guddle at 01:04
Newer Post Older Post Home