Catching Fire (2009) is the second book in The Hunger Games trilogy. The story begins where the first book ends, and this review may contain spoilers for people who have not read the first two books in the series... 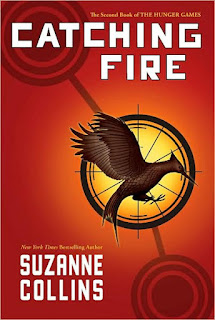 Katniss Everdeen, the heroine at the heart of the story, returns home to District 12 after her victory in the arena to find that she and her family have been moved to the Victors' Village. As she tries to settle into her new environment, she struggles with her feelings towards Gale and Peeta.

On the eve of commencing a 'Victory Tour' of the districts, President Snow visits Katniss and warns her that her actions in the arena have sparked unrest in the districts. He tells her that she must prove her love for Peeta in the arena was genuine and use the tour to quash any rebellion. But movement has begun in the districts and Panem's security forces have rolled in. President Snow announces the 75th Hunger Games will be the Quarter Quell in which all victors of past games will be in the reaping meaning Katniss may need to go back into the arena.

As the second book in the trilogy, Catching Fire is a bit of a bridging story leading up to the conclusion in Mockingjay (2010). In some aspects it is a bit of a repeat of aspects of the first story, but new characters are introduced which add to the tale. The pace is slow at the start, but becomes picks up as the action quickens in the arena. It is predictable in parts but overall quite enjoyable.

Katniss remains an interesting heroine. She is deeply flawed, trying to understand herself and her place in this dysfunctional world.  This novel also allows us to learn more about Haymitch, Peeta and Gale, which gives them greater depth and fleshes out their backstories.

The book ends in a cliffhanger which may frustrate readers who do not have the third volume handy. My advice is to have Mockingjay close by to start as soon as you finish Catching Fire.

See also my reviews of the other books in this trilogy: The Hunger Games and Mockingjay.
Posted by Ina Guddle at 13:16
Newer Post Older Post Home