Philip Pullman, best known as author of the His Dark Materials trilogy, contributed to the Canongate Myth series with his 2010 novella The Good Man Jesus and the Scoundrel Christ. The story is a retelling of the life of Jesus Christ with a twist - in this tale Jesus has a twin brother named Christ. 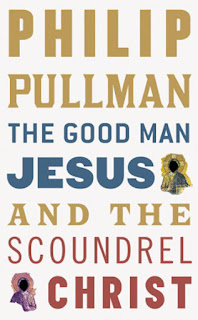 The two brothers are raised by Mary and Joseph and the events in their lives parallel the story commonly known from the Bible, starting with the nativity through to the passion of Christ. Jesus was the favourite son and Christ was always second-best. Sibling rivalry in childhood gives way to distinct differences of opinion as the men age. Jesus is portrayed as the good man with a moral core and Christ wants to bring about organised religion under a centralised, hierarchical church. Christ watches from the wings and, as his brother gains followers, creates a record of Jesus' ministry allowing Christ to merge with Jesus.

When first published the novel generated a lot of controversy, largely because Pullman is a well-known atheist and he challenges the story of the life of Christ. But I suspect that few protesters read the book as its contents are hardly worth protesting over. Aside from the twin twist, the story is not anti-Christian at all. In fact the central message I took away from the tale is that Christ had a lot of good, well-meaning ideas which are better left outside organised religion.

Pullman has clearly done his research and tells his revised version of events in an interesting way, but the story lacked something for me and was a bit of a disappointment. I kept waiting for something to happen which never did. I thoroughly enjoyed His Dark Materials and had expected Pullman's impressive story-telling abilities to be applied to this tale and anticipated that this would be more of a satire. While there were some compelling passages and clever ideas present, I found the novel lacked wit and was ultimately quite boring. Pullman is an extraordinarily gifted writer and I do look forward to his next endeavour.
Posted by Ina Guddle at 16:46
Newer Post Older Post Home