Mockingjay (2010) is the final instalment of The Hunger Games trilogy by Suzanne Collins. The story follows on from the end of the previous book and takes the tale into a new realm, away from the manufactured arena of the games and into a real battle for survival for all citizens of Panem.

Note: Potential spoilers ahead for those that have not read the previous books in the series. 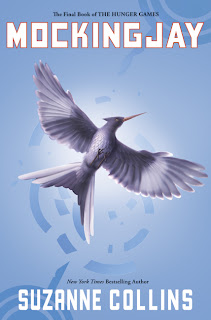 War has broken out, with the rebels in the Districts rising up to counter the oppressive Capitol. Katniss Everdeen, the champion of the Hunger Games, has been rescued by the rebels and becomes a symbol of the uprising - their Mockingjay. Desperate to kill President Snow, who has caused her such heartache and suffering, Katniss leads a small band of warriors deep into the Capitol.

This book was frustrating in parts because of Katniss. It seemed like she was always in a hospital bed somewhere recovering from injuries, taking medications to help her cope, and trying to stay emotionally removed from what was happening around her. While it is understandable that she is suffering from post-traumatic stress, she comes across as weak and it makes for a boring read when the protagonist is apathetic. Katniss' lack of emotion sucks some of the life out of the story, particularly  in terms of her romantic triangle with Peeta and Gale. As a symbol of a revolution, she could have been more charismatic.

If she had more time to write and wasn't in such a rush to capitalise on the success of the first two books, Collins could have strengthened this story and made it more compelling. She could have opted for a bolder move, and perhaps changed from first person narrative to writing from other people's perspectives. With Katniss suffering so greatly from her time in the arena, other characters could have provided insight and moved the story along. Collins should also have taken more time to flesh out this story as significant events are mentioned in passing and we are not allowed to feel how Katniss and other characters react to these events. The ending is not fairy-tale happy, which was fitting for such a dystopian story. But it could have been better executed as the resolution felt extremely rushed.

Overall, I enjoyed this trilogy despite its flaws and I particularly liked the direction this story moved in. It is a great holiday read, and a story that makes you want to read on and find out what happens to the characters.

See also my reviews of the other books in this trilogy: The Hunger Games and Catching Fire.
Posted by Ina Guddle at 14:44
Newer Post Older Post Home