Pride and Prejudice (1813) by Jane Austen is one of my all-time favourite novels. The characters are so familiar and beloved to me as I have read the novel many times and viewed every possible adaptation.  As such I have sworn I would not go near any attempted sequel or 'inspired by' works which follow the Darcys after their marriage or have them fighting zombies. 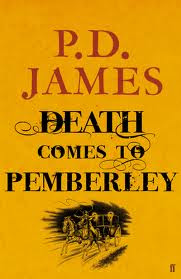 But then, late last year, renowned British crime writer P D James put me in a pickle when she published Death Comes to Pemberley (2011). Taking up the story six years after Elizabeth and Jane Bennet married their beaux, Elizabeth Darcy is preparing for a ball at Pemberley when her disgraced sister Lydia arrives screaming that there has been a murder on the estate. Darcy heads out into the night to retrieve the body from the woods. And so begins the mystery of who committed the crime. To say too much about the plot would spoil the story for others.

The characters from the original novel are joined by some interesting new faces (and visitors from other Austen novels).  It was lovely to read about the odious Lady Catherine de Bourgh and I laughed out loud at Mr Collins' condescension. James writes of these characters in keeping with Austen's style. For example, when Mr Collins 'began by stating he could find no words to express his shock and abhorrence, and then proceeded to find a great number, few of them appropriate and none of them helpful' (p162). While I loved these parts, I must say I wish there were more of them and would have written the narrative differently to allow more interaction and witty banter between the peripheral characters and Mr and Mrs Darcy.

I understand that in Austen's times there would not have been a detective, and that crimes were investigated by local magistrates. So there is no Poirot, Miss Marple or James' own Dalgleish, to find the clues and solve the crime. However, the mystery element is surprisingly weak given that James is such a master of the genre.

James is clearly an Austen fan. This is a homage in which she tries, and largely succeeds, to capture the language, wit and spirit of Jane Austen. The first twenty plus pages are a summary of Pride and Prejudice which was a helpful refresher but also a bit perplexing as I would imagine no one would approach this novel without having read (or at least viewed) the original story.  Where she fails, in my opinion, is in her characterisation of Elizabeth, who lacks the spunk and wit of the original character and fades into the background of this story. Elizabeth seems to have lost her lustre in marriage and motherhood - which is dreadfully disappointing.

It would be easy to be overly critical and bag this book as a failed attempt by James to inhabit the world of Austen. But as a lightweight holiday read I must say I enjoyed my return to Pemberley. I'd suggest that readers leave their assumptions behind and just take pleasure in the book for what it is.
Posted by Ina Guddle at 11:53
Newer Post Older Post Home