I have been reading a lot of diverse books lately - epic novels like A Game of Thrones, introspective business books like Strengths Finder 2.0, labyrinthine literature like The Blind Assassin, and thoughtful essays in Hitchens' Arguably. Each has been so enjoyable - the reading equivalent of an eight course dinner of complex flavours and textures. Yesterday I went looking for dessert - something light and fluffy - and Explosive Eighteen (2011) by Janet Evanovich fit the bill perfectly. 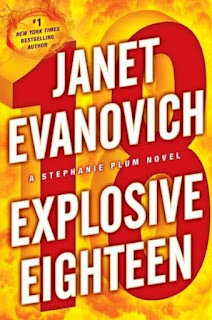 Explosive Eighteen is the latest in a long line of novels about inept bounty hunter Stephanie Plum. Stephanie has returned home from a nightmare trip to Hawaii that she does not want to talk about. The guy seated next to her on the plane is now dead and there's a mysterious photo in her bag that she knows nothing about. After throwing it away, Stephanie discovers there is a lot of interest in the photo with the FBI, gangsters and the dead guy's widow knocking on her door to acquire it.

Besides the photo, Stephanie has other things to deal with. She has a line of skips to collect, including her nemesis Joyce Barndhart. Morelli isn't happy with her, Grandma Mazur is urging Steph to drink love potions, Ranger is continually coming to her rescue, and Lula is single-handedly keeping the Trenton fast-food industry afloat.

The title is a misnomer, as there is nothing explosive here. Just more of the same craziness in a lightweight read that requires absolutely no thought. Explosive Eighteen has moments of humour and served as a perfect diversion from the other things in my reading pile. It is quick and easy and, if you don't expect anything more, you won't be disappointed.

As I said in my review of other Plum novels, the series has been hit-and-miss. Some books have been excellent while others have really missed the mark. The formula is always the same: a fairly lame overarching storyline; a comedy of errors in trying to haul in bizarre bail jumpers; witty banter and screwball clumsiness; and, the never-ending love triangle of Plum/Morelli/Ranger.

For me, the biggest problem with the series is that the characters have never really evolved. It has been 18 years since One for the Money (1994) and Evanovich has brought out a new Plum novel every year since then. I know I have aged in that time, but Stephanie hasn't. She hasn't gained skills in her years as a bounty hunter and there is only so many times she can blow up her car before it gets old. I think it is time for Steph to grow up, make decisions about her life, and for the series to take on another dimension.

Notorious Nineteen (2012) is due out in November. I doubt that Janet Evanovich would have heard her critics and altered her formula. Will I read the next one? Of course. Will it frustrate me? Probably. But I know that Evanovich will at least provide me with an entertaining diversion for a few hours, and so it will be worth the investment of my time and money.

My review of Smokin' Seventeen is also available on this blog.
Posted by Ina Guddle at 10:46
Newer Post Older Post Home