Swedish author Steig Larsson's Millennium trilogy begins with The Girl with the Dragon Tattoo (2005). Translated into English in 2008, the book and its sequels have been on the bestseller lists practically ever since and have been translated into two film franchises. 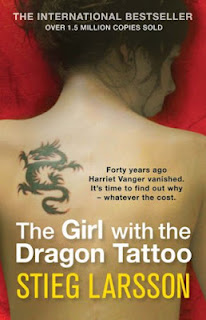 By now, the story is well known. Journalist Mikael Blomkvist loses a libel case after a story he published in his magazine Millenium. With his reputation in ruins, Blomkvist accepts a job offer from retired businessman Henrik Vanger to conduct an investigation into the disappearance of his niece, Harriet, who has not been seen for over 36 years. Working out of a guest house on the Vanger's island estate, Blomkvist hires a research assistant: goth computer hacker Lisbeth Salander. She is the girl with the dragon tattoo. Together they delve into the mystery, uncovering dark Vanger family secrets.

Lisbeth is an unlikely heroine. She is antisocial with a disturbing past, but she is so intriguing because her character is full of contrasts: strong yet vulnerable, brilliant yet damaged. You can't help but care for her and want to learn more about how she became who she is.

The story is intelligent with many strands building to an exciting climax. The relationships are complex,  and there are many characters to keep track of.  There is also a darkness to the book, and it doesn't shy away from unspeakable acts of violence against women. While the mystery takes a while to get going, around the half-way point the suspense becomes page-turning. Immediately upon finishing this book I commenced the second novel in the trilogy, The Girl who Played with Fire, as I wanted to spend more time with Lisbeth and see what happened next.

With regard to the films, I have seen both the Swedish film (2009) and the American version (2011). While each was admirable for different reasons, ultimately I prefer the Swedish version more. 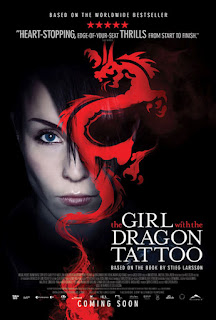 The Swedish film, directed by Niels Arden Oplev, features Michael Nyqvist as Blomqvist and Noomi Rapace as Salander. It is filmed in the bleak, snowy Sweden where you can really feel the cold as you watch. It is gritty and the scenes of violence are frighteningly realistic. Rapace in particular was an extraordinary find. She completely inhabits the character and is so convincing in her portrayal that she is Salander for me. I have since seen other films with Rapace and she has shed Salander entirely and proven herself to be an incredibly talented actress.

When I heard they were making an American version of the film I was disappointed as I thought the Swedish one was fantastic and it seemed a bit too soon to rehash the same tale. I figured they would Americanise it, so I was surprised when it was set in Sweden and tried to be as faithful to the book as possible. 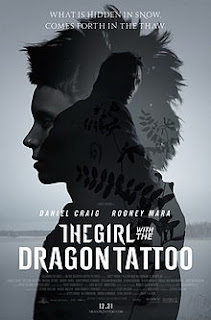 Daniel Craig plays Blomqvist and Rooney Mara is Salander. It is directed by one of my favourite filmmakers,  David Fincher. So with the combination of an excellent cast and an amazing director I had high hopes for this film. While I thought it was good, I didn't think it was great.  I think there is difficulty in watching it after having seen the first film and read the book, because the story line is so familiar. Perhaps Fincher needed to make a few changes so it wasn't quite so faithful to the original and gave the audience a bit of a surprise. His visual style was definitely there (especially in the amazing title sequence with the brilliant cover of Led Zepplin's "Immigrant Song"). But the result is a bit too conventional, missing the edge that I had hoped Fincher would provide.

My reviews of the The Girl who Played with Fire and The Girl who Kicked the Hornet's Nest  also appear on this blog.
Posted by Ina Guddle at 22:36
Newer Post Older Post Home