The second novel in Steig Larsson's Millenium trilogy, The Girl Who Played with Fire (2006) continues the story of unlikely heroine Lisbeth Salander. 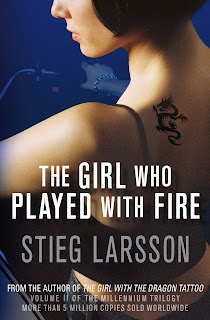 Lisbeth has finished her work with Mikael Blomkvist and thanks to the funds she has drained from the Wennerstrom bank accounts she is financially independent. She leaves Sweden and travels for more than a year before returning home and buying a new apartment.  Meanwhile Blomkvist is back at Millenium magazine and is preparing to publish a story about a sex trafficking ring run by underworld figure Zala, who played a prominent role in Lisbeth's past. Lisbeth's life then becomes more complicated when she is accused of murder.

In the first book Lisbeth was enigmatic with little hints about her life scattered throughout the story so that readers understood there was something more that would explain the complexities of her character. This novel fleshes out much of her back story as we learn more about her past and the influence of events that have shaped her.

Larsson again keeps the action moving, adding layer upon layer to the mystery. He is an excellent storyteller and this book is a definite page turner. Oftentimes in trilogies I find the middle book to be the weakest link, but not so here. This trilogy, as a whole, is compelling and contains no weak links. 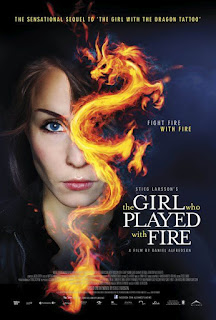 The film version is directed by Daniel Alfredson. Michael Nyqvist and Noomi Rapace return to their roles, as do most of the supporting cast. While not as exciting as the first film, the performances are universally excellent. It is helpful to have read the book before seeing the movie to get the most out of it.
See also my review of The Girl with the Dragon Tattoo.
Posted by Ina Guddle at 07:20
Newer Post Older Post Home