The Sting in the Tale

The final instalment of Steig Larsson's Millennium trilogy, The Girl Who Kicked the Hornet's Nest (2007), brings Lisbeth Salander's tale to an end. This review may contain spoilers for the handful of people who have not read the bestselling books or seen the films. 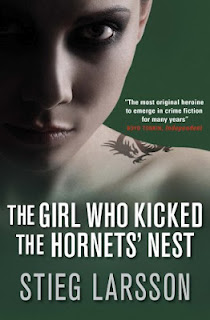 Part three begins where the previous book, The Girl Who Played with Fire, finished. Journalist Mikael Blomkvist is back at his desk as editor of Millennium magazine. Lisbeth Salander is in hospital fighting for her life. As she recovers, she must fight for her freedom when she is charged with murder. Blomkvist has always believed in Lisbeth and is committed to proving her innocence. Along the way, Lisbeth confronts her past and seeks vengeance on those who done her wrong. Former spies, corrupt cops, and a whole range dodgy crims populate the story with a complex web of interwoven sub-plots adding to the adventure.

Lisbeth remains such an interesting character - complex, mysterious and utterly unforgettable. Unlike anyone I know, Lisbeth drives this series on and makes it so exciting. I would have liked to have more of her in this book and unravel more of her mystery.

The book is not perfect - it could have been shortened with some of the subplots whittled down. But having read the three books in rapid succession, my feeling at the end was one of relief and sadness. I was delighted to have read the series and enjoyed my time with the fascinating Lisbeth, but I was saddened that it was all over and that Larsson would not have any more novels to come. 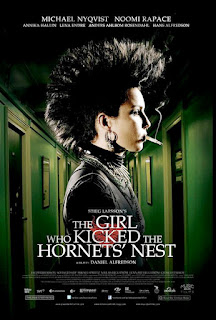 Daniel Alfredson returns to direct the Swedish version of this film, reuniting Michael Nyqvist and Noomi Rapace. The film requires viewers to have seen the previous movies, or to have read the books, to understand what is taking place. Lacking the action of the previous instalments, much of this film takes place in court rooms and hospitals. There is a great deal of suspense and tension that will keep you engaged to the end, but as is often the case, the book is so much better.

My reviews of The Girl with the Dragon Tattoo and The Girl Who Played With Fire are also on this blog.
Posted by Ina Guddle at 07:35
Newer Post Older Post Home