To have and have not

The proverb 'the rich get richer and the poor get poorer' neatly sums up the gulf that has been growing between the classes in most Western societies. Inequalities of wealth are causing health and social problems that impact on society as a whole. 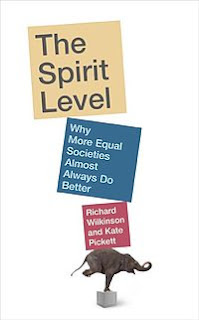 In The Spirit Level: Why More Equal Societies Almost Always Do Better (2009), epidemiologists Richard Wilkinson and Kate Pickett explore the ill effects of the class divide and argue that greater equality is better for everyone. Tackling topics such as mental health, obesity, education, imprisonment, drug use, teen pregnancy, trust, violence, child wellbeing, social mobility and physical health, the authors show that outcomes in these areas are far worse in societies where there is less equality. Looking at 23 countries, they draw on a huge evidence bank - including data from the UN, World Health Organisation, Census, and elsewhere - to build a compelling case for a more equal society.

Unsurprisingly,  Scandinavian countries and Japan are at the more equal end of the scale, while the UK, USA and Portugal are on the complete opposite side of the divide. The rest of the countries explored fall somewhere in between. For America the researchers have broken down the data even further on a state by state basis.

In early 2010, shortly after the book was released,  I was at a conference focussed on outcomes for children. Many of the esteemed presenters cited this book during their sessions, stating that Wilkinson and Pickett's findings had matched their own research on child health, education and wellbeing.

I read this book in between Presidential debates of the recent US elections which provided an interesting backdrop to my reading as the gap between rich and poor is greatest there. While the politicians debated tax cuts, government intervention, 'Obamacare' and the like, there was a missed opportunity to really talk about the vast social inequities that have grown in recent decades.

It is clear that the weight of the evidence Wilkinson and Pickett have unearthed was compelling, but it was less clear what could be done about it other then fixing the taxation system that allows loopholes to the super-rich. There is a lack of political will to make the changes necessary to bring about a more equal society, so this book should be compulsory reading for every politician at all levels of government. The cumulative impact of the evidence was overwhelming but it is easy to despair at the prospects of any change. 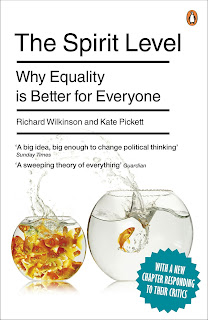 I am glad that I have read The Spirit Level, but I cannot say it was a particularly enjoyable read. It requires the right frame of mind to absorb the detail. It was repetitive in parts and the scatter graphs illustrating the prose were dull. Overall, however, I think it is an important book which provides a compelling case for equality and I would recommend it.  The book was re-released in 2010 with an improved subheading - "Why Equality is Better for Everyone" - and a chapter responding to critics. There is also an Equality Trust website which summarises the research and provides other resources.
Posted by Ina Guddle at 08:48
Newer Post Older Post Home