Crowns do queer things to the heads beneath them 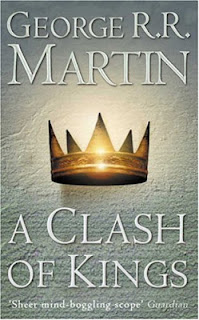 Civil War has broken out in Westeros. Lord Eddard Stark’s eldest son Robb has declared himself ‘King in the North’ and seeks to avenge his father and reclaim his sisters by going to war with the house of Lannister/Baratheon. The vile boy King Joffrey sits on the Iron Throne but rules in name only - taking his queues from his mother Queen Cersei and his uncle Tyrion, now Hand of the King. Meanwhile, former King Robert Baratheon’s brothers, Stannis and Renly, have both claimed the Iron Throne for themselves and are heading to wage war on King’s Landing.

Like its predecessor, the story is told from the perspective of various characters. At Winterfell crippled Bran Stark is puzzled by wolf dreams. Beyond the Wall Jon Snow of the Night’s Watch searches for his uncle and fends off wildlings. In Kings Landing, Sansa Stark tries to remain in brutal Joffrey’s good favour while plotting escape. Tyrion Lannister prepares for war. Meanwhile Catelyn Stark journeys across Westeros as an envoy of her son Robb, and resourceful Arya Stark tries to make her way back to Winterfell. Self-obsessed Theon Greyjoy seeks his father’s favour by claiming territory for himself. Meanwhile, across the narrow sea Daenerys Targaryen tends to her dragons and tries to muster a force that can take back her crown.

There were some new characters in this book that I really enjoyed. Davos Seaworth, the Onion Knight in the service of Stannis Baratheon, brings a fresh perspective to the action. Brienne of Tarth is also fascinating addition, as a female knight in the service of Lord Renly and later Catelyn Stark. Each character is believable and moves the story along. 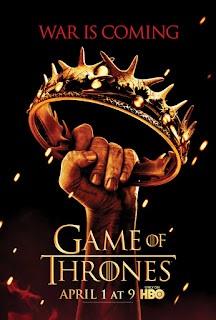 Martin has achieved something incredible in balancing so many characters, locations and subplots in an 800+ page novel. Overall I found this book exciting and could not wait to get back to it whenever I had a spare moment to read. Some characters I found less interesting than others (Bran, Daenerys) but for the most part I looked forward to returning to my favourites (Tyrion, Theon) to see how they were progressing. If I have one criticism it is that I have spent so much time in Westeros that I haven’t had time for other reading…  My only problem now is weaning myself off this series, as I desperately want to start A Storm of Swords (2000) but need to get a few other books read first!

A Clash of Kings was the basis for the second season of HBO's Game of Thrones. It is an amazing adaptation of the books and I am looking forward to season three starting in March 2013.

My review of Game of Thrones is also available on this blog.
Posted by Ina Guddle at 08:57
Newer Post Older Post Home