Jennifer Egan’s Pulitzer Prize winning A Visit from the Goon Squad (2010) is a wonderfully quirky novel comprised of thirteen interlinked short stories. The stories in the book dart about around the globe - New York, Naples, Africa, San Francisco and beyond – and cover about 40 years in the lives of various characters.

A character that is marginal in one chapter becomes the protagonist in the next. Just when you are left wondering, “I wonder what happened to…” you find a passing reference to someone at a different point in his or her life. It does take a bit of getting use to and perhaps it is best to just read each chapter as an individual story, then step back when you are finished and marvel at the whole. 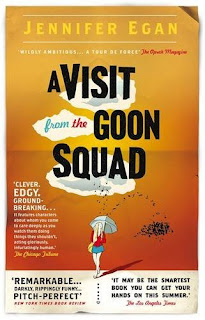 You begin by reading about 30-something kleptomaniac Sasha on a date in New York, and then you don’t see her again until you read a story about teenaged Sasha in Naples. Later you learn more about Sasha through reading the PowerPoint journal of her twelve-year-old daughter Ally. In between you meet: Sasha’s boss, music producer Bennie Salazar struggling to make a connection with his son; philanderer Lou Kline and his string of broken lovers and children; Bennie’s wife Stephanie who hides her friendships; could-have-been actress Kitty Jackson; tragic Rob, Sasha’s close college friend; and many more.

There is great humour in the book and I often found myself laughing out loud. My favourite story features PR Queen La Doll who is attempting a comeback after she accidentally maimed the who’s-who of New York and was knocked from her throne. She then takes on an unlikely client, a genocidal dictator, in an attempt to reinvent his image and revive her career.

The goon squad is a reference to the thug that is time – it creeps up on us and whacks us when we aren’t looking. All the characters have issues with time – time passing them by, lost youth, aging, and the sense of what could have been had another path been taken.  The other central theme is music and the interconnection characters have with the industry makes for a fascinating soundtrack. In particular, I loved the obsession Lincoln has with great rock and roll pauses.

After reading the book I went online and found that many people had tried to draw flow charts connecting the characters and timelines to put the novel in chronological order.  Just the kind of nerdiness that I would have pursued, had others not done it for me!

Egan is a wonderful writer with a keen eye for human nature. Whether she is writing in first, second and third person narrative, she is able to get under the skin of her characters and bring them to life.  Her writing is fun and clever, but never arrogant. I can see why Egan won the 2011 Pulitzer Prize for Fiction. Well deserved for this brilliant book. Highly recommended.
Posted by Ina Guddle at 08:09
Newer Post Older Post Home