In January 2015 I read and reviewed Caroline Overington's Last Woman Hanged (2014), the true crime story of convicted murderer Louisa Collins. I greatly enjoyed the story of the legal battles to convict Collins and the insights into Australia's judicial history. 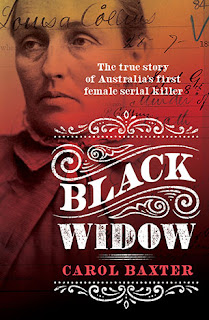 Historian and genealogist Carol Baxter has published her own account of the trials and execution of Louisa Collins in Black Widow (2015). I attended Baxter's book launch on 10 June and heard her speak about the impressive research she had done to uncover the story and her interest in this part of Australian history. Not only did she mine the archives and comprehensively scour news reports and transcripts, but she also sought expert advice on colonial law to confirm her understanding of the court proceedings in the context of the time in which they occurred.

Black Widow unfolds like a murder mystery, starting with Collins illness and death. If the reader was unaware of Louisa Collins fate, the court room dramas of two inquests and four trials would leave the reader anxious as to whether or not she would be convicted. At the book launch Baxter was keen to ensure she did not give too much away so that the reader would find out for themselves that Collins was convicted and sentenced to hang.

The focus on Collins' legal battles is extremely interesting. Against the backdrop of state politics, the rising women's movement, and the overseas horror of the Jack the Ripper murders, the Collins' case is of historical significance. Baxter compares the public sentiment towards Collins as that of Lindy Chamberlain in more recent times, which was an interesting parallel.

Originally to be called The Lucretia Borgia of Botany Bay, publication of Black Widow was delayed and the title changed when Overington's book was published first. The six month gap between the books has allowed for each to be assessed independently, but also compared where required.

The similarities between the Overington and Baxter books are obvious - both concern the same case and have used much of the same primary sources for their research. I preferred Baxter's writing style to Overington and enjoyed the way in which the story unfolded in Black Widow. However, I do not share Baxter's conclusion that Collins committed these murders beyond reasonable doubt. Overington presented compelling evidence of other means of arsenic poisoning and pokes so many holes in the case that it I remain unconvinced of her guilt.

Baxter considers Collins to be 'Australia's first serial killer' but I am not convinced. Firstly, how many deaths does one need to be responsible for in order to be a serial killer?  Even if she did kill both of her husbands, I would have thought two murders does not a serial killer make.

To be convicted of murder there needs to be both actus reus (the guilty act) and mens rea (the guilty mind). With the death of her first husband, Charles Andrews, there is a motive for murder (to be free to be with Collins) but the murderous act is largely circumstantial. With the death of her second husband, again there is circumstantial evidence of the guilty act, but what is the motive?

Regardless of whether or not she actually committed these crimes, the legal case against Collins was fundamentally flawed and the fact that she had three hung juries before conviction is an unprecedented abuse of the legal system.

I am happy to have read both these books and would recommend them both... although I would encourage a gap between reading so as to enjoy each independently.

My review of Overington's Last Woman Hanged is also on this blog, as is a summary of Overington's session at the Sydney Writers' Festival on capital punishment.
Posted by Ina Guddle at 08:29
Newer Post Older Post Home