On 28 July 2015 the Man Booker Prize Longlist was announced. Thirteen titles are on the longlist from authors around the globe.

There are a number of familiar faces like Anne Enright (winner in 2007 for The Gathering) and previously shortlisted authors Tom McCarthy (2010) and Andrew O'Hagan (1999). But there are also a range of first time authors like Bill Clegg, Chigozie Obiama and Anna Smaill.

I am currently reading Anne Tyler's A Spool of Blue Thread (2015) and enjoying it immensely. I do have a soft spot for Ms Tyler, having loved her Dinner at the Homesick Restaurant (1982).

I have heard great things about The Fisherman by Chigozie Obioma. The story of four brothers in Nigeria who go fishing on a forbidden river, as told by the youngest brother.

Marlon James' A Brief History of Seven Killings sounds fascinating. Based on the 1976 attempted murder of Bob Marley, it tells the story of Jamaican politics and culture from the 1970s to the 1990s. 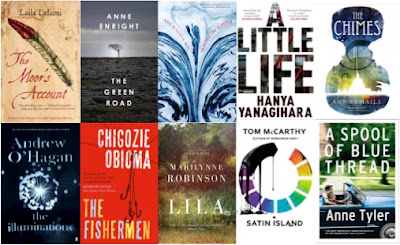