On Friday 22 July 2011 Anders Behring Breivik brought terror to Norway. He set off a bomb in the heart of Oslo's government sector before driving north, alongside the picturesque Tyrifjorden to Utoya Island, where he executed teenagers and staff at a labour youth camp. By the end of the summer's day he had murdered seventy-seven people and turned himself into the police. 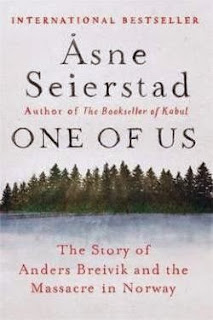 In the aftermath there were many questions. Who was Anders Breivik? Was he a madman or a terrorist? Could this have been prevented? And above all, why did this happen?

Norwegian journalist Asne Seierstad set out to uncover the answers to these questions and documents her findings in her latest book One of Us - The Story of Anders Breivik and the Massacre in Norway (2015).

At the Sydney Writers' Festival in May 2015, I attended a session where Seierstad spoke about this book. When I met Seierstad afterwards at the book signing I told her that I was unsure whether or not I wanted to read this book. The subject matter is so uncomfortably horrible, and I didn't want to give any attention to Breivik. But Seierstad is such an impressive writer, I decided to give this book a read.

The first section of the book paints a picture of Breivik as a troubled child in a dysfunctional home. A loner, abandoned by his father, at home with a mother who did not know how to parent, Breivik becomes isolated. He tries but fails at many things - becoming a graffiti tagger, operating businesses (selling fake diplomas) and becoming a mason. He does not fit in anywhere and spends five years as an adult in his room playing video games. This section of the book was a bit slow for me, largely because I had heard Seierstad describe his history at the Writers' Festival.

She then goes on to talk about Breivik's 1500 page manifesto on the Islamisation of Western Europe which he tried to send to thousands of email addresses on the morning of the terror campaign. Breivik was no writer, and his declaration is essentially a cut-and-paste of various blogs and websites he has prowled and quotes he has misused. He calls for an expulsion of immigrants in a rant against multiculturalism, feminism and the Labour party.

The chapter titled 'Friday' describes the day of the terror in graphic detail. It is a compelling story of mayhem and innocence lost. It builds to a climax, almost like a mystery thriller, and is deeply emotional - feeling frustration at the bungling of the police, disbelief at the relentlessness of the attack, disgust that it is so easy to buy guns and bomb materials online, fear alongside the children running for their lives, dispair as the parents await news of their children's fate.  It is masterful writing and an extraordinary feat of journalism.

The court case and the sentencing follow (amazingly, he was sentenced for just 21 years). Breivik was found to be responsible for his crimes. He now resides in prison and complains about the poor conditions of his confinement. He never achieved the fame and glory he was seeking. Nor did he reverse multiculturalism through fear, but rather pulled the people of Norway together against hatred.

Reflections one year on from the survivors and the families who lost loved ones are heartbreaking. What I really appreciated was how Seierstad shifted the focus from the narcissistic Brevik to his victims. Meeting Bano Rashid, Simon Saebo, Anders Kristiansen, Viljar Hanssen and others throughout the book made a deep impression. So many young lives, with so much promise, now dead or wounded. Their families' loss is profound and unending. The message that resonated at the end of the book is one of community, belonging and resilience as a response to terror.

Meticulously researched, cleverly written, One of Us is a compelling book reminiscent of Truman Capote's classic In Cold Blood (1966).  I would definitely recommend it to anyone interested in journalism as Seierstad delivers a masterclass in storytelling.