At the Sydney Writers' Festival in May 2015 I had the pleasure of listening to Australian author Kate Grenville talk about her latest book, One Life (2015), a memoir of her mother. 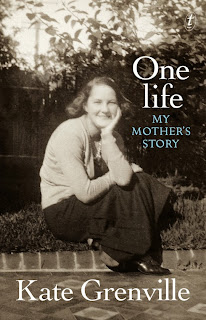 Nance was born in 1912 to rural publicans Bert and Dolly Russell. She  felt unloved as a child, continually being sent to live with relatives and wrenched apart from her beloved brother Frank. Her family struggled with their small businesses, and the relationship between her parents was not warm.

Determined not to become her mother, Nance pursued an education. Uncommon for her time, Nance went to the University of Sydney and studied to became a pharmacist. Grenville described in detail the sacrifices Nance made to study and work in order to graduate and join the profession.

As a young woman, Nance was wooed by a number of suitors. She decided upon Ken Gee, a lawyer with Marxist leanings, and married him. The depiction of her marriage is heartbreaking. Ken was always distant, in love with his ideas. She desires warmth and feels trapped because of the children.

The second world war hits and money is tight, Nance goes back to work facing every mother's child care dilemma.  She studies the business carefully and decides she can do this herself, opening her own pharmacy on Sydney's northern beaches. She stares down the sexism she faces from suppliers and customers, and gets on with the job.

I really enjoyed this book. One Life is such a loving tribute to Nance Gee, with Grenville portraying her as a whole woman, a gifted professional, a feminist and a mother. She was a woman of her time. During the SWF, Grenville said she wanted wanted to publish a memoir because the stories of the lives of ordinary women are never told. Through Nance we learn of twenty-first century Sydney and gain an important perspective on the events that shaped our world (the Depression, WWII etc).

More importantly, through Nance we reflect on love, commitment, family, and the ties that bind. Nance comes alive in this memoir, with Grenville's masterful storytelling applied to Nance's own words. My only quibble is that the story fades too soon, rushing through Nance's later years too quickly. I would have liked to have learned more of the older Nance. That said, I recommend this book highly.