The Shop around the Corner

When I knew I would be meeting Asne Seierstad at the Sydney Writers' Festival in May this year, I grabbed my old copy of her bestselling book The Bookseller of Kabul (2002) and asked her to sign it for me. I had purchased it back when it came out, and I would have sworn that I had read it as the story was so familiar to me. I must have picked it up and flicked through it, but never actually read it entirely. 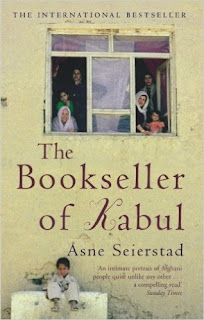 After reading Seierstad's latest book One of Us (2015) about Anders Breivik, I thought it would be good to return to her earlier work and be sure that I had read it. A committed journalist, Seierstad immersed herself in the story and with her sharp, enquiring mind she crafted a compelling story.

Seierstad arrived in Kabul in September 2001, shortly after the 9/11 attacks. She donned a burka and went to live with a bookseller and his extended family for four months, during which time she acquired the material for this book. She learns from the family about Afghanistan during the Taliban, about the role of women in society and about the hopes, dreams and fears of this unhappy family.

The Bookseller, his wives, children and extended family live in a few rooms in Kabul. He operates a popular book store, as well as several stalls in hotel lobbies, and has a number of lucrative contracts printing text books in Pakistan.

The patriarch may be an intellectual and a good business man, but he rules his family like a dictator. He speaks openly about women's rights - to work, to dress in Western attire, etc - but keeps his women at home in strictly gendered roles. His sons are not educated as they must constantly work for him. His cruelty is shown in his persistence with an impoverished carpenter who took some of the booksellers postcards, demanding that he be jailed for the crime.

But it is the women in the family who Seierstad devotes much empathy. Sharifa, the bookseller's first wife, who is sent off to Pakistan without a moment's thought when a teenage Sonja catches his eye. Leila, the bookseller's sister, who slaves after her brother and nephews while dreaming of becoming a teacher and finding a life of her own. Bibi Gul, the mother, who seeks comfort in food.

I really enjoyed this book and Seierstad's writing. Her depiction of the pervasive dust, the bureaucracy, the danger, and the desire are all brought to life. I have previously read fictional accounts of Afghani life, such as Khaled Hosseini's The Kite Runner (2003) and A Thousand Splendid Suns (2007) which I found to be gripping tales (but read long before I started blogging). In parts Bookseller reminded me a lot of Splendid Suns, and the plight of girls and women. Well worth a read.
Posted by Ina Guddle at 13:58
Newer Post Older Post Home