Bill Shorten has been the leader of the Australian Labor Party and Leader of the Opposition since October 2013, following the election of Tony Abbott's conservative government. Over the past two years he has been in the national spotlight, but it seems to me like the real Bill Shorten is not really known.

David Marr, one of my favourite journalists, has written about Shorten in the Quarterly Essay (QE59). Faction Man (2015) explores Shorten's early years, his rise through the union movement, his involvement in the political executions of Rudd and Gillard, and his quest for the top job. 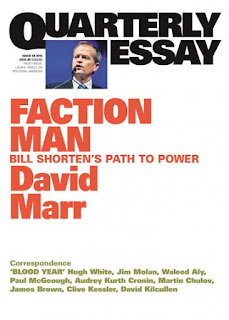 While Shorten is obviously intelligent, he lacks the charisma of Rudd, Gillard, Hawke, Keating and many other Labor leaders. He comes across as wooden and scripted, slightly daggy and bland. But more importantly, his politics are so beige. He has not lived up to the promise of Opposition, and instead has sided with the government on heinous policies and essentially painted himself into a corner.

As Marr writes, "It isn't true he stands for nothing. There is a list of decent Labor policies he's always backed: jobs, prosperity, education and health. What's counted against him is he stands for nothing brave." A damning indictment on a man desperate to lead the nation.

This Essay was published the week that Tony Abbott lost the leadership to the charismatic Malcolm Turnbull, and now Shorten's fate has taken a turn. His standing in the polls has dropped to a pathetic 15% as preferred Prime Minister, yet he is unlikely to face a challenge from within his own ranks because of Turnbull's popularity. So he will stay and lead Labor to the next election.

Marr's previous essays on George Pell, Tony Abbott and Kevin Rudd were far more engaging. But I really don't believe it is Marr's fault that this essay didn't have the same appeal. His subject matter is just so boring, despite his Machiavellian machinations to remove Rudd and Gillard. I was hoping to find more character and less robot, but you can't find what isn't there. That said, Marr is a brilliant writer and investigative journalist.