Nothing can come of nothing

I was thrilled to score tickets to the Sydney Theatre Company's production of King Lear this week. I had not studied Lear since high school (more than a few years ago) and I had forgotten so much that I essentially came to it fresh. This is a play about power, relationships between parent and child, parallels and divine justice. 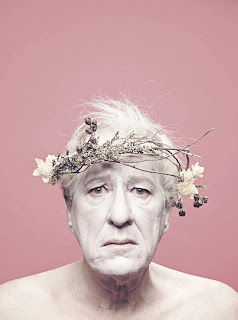 The story is a tragic tale of an elderly King who decides to divide his kingdom among whichever of his three daughters expresses their love for him in the most pleasing way. His eldest two daughters, Goneril and Regan, gush glowingly of their father. His youngest, Cordelia, refuses saying 'nothing', and she is immediately disinherited. The eldest two, and their husbands, are awarded the kingdom. Having given away his power, Lear now finds himself shunned by his eldest daughters, and he descends into madness.

Acclaimed Australian director Neil Armfield AO has helmed this production, bringing together a star-studded cast of actors and putting them through their paces.

The stage is minimalist - starting with a cavernous black, shifting to a grey, before finishing in a blinding white stage - designed to reflect the changing phases of Lear's mind. Designer Richard Cousins has created a subtle set, devoid of props, in which all eyes are on the talent and the words. The storm scene in particular was marvellous, with wind and rain pouring on the stage for over thirty minutes.

As the curtain rises on an empty stage, Marilyn Monroe approaches a microphone and sings a sultry 'happy birthday'  to Lear before pulling off her wig to reveal herself the Fool in disguise. This marvellous opening provides a reason for the court to come together to celebrate the 80th birthday of the monarch.

We then meet Lear, played by the legendary Geoffrey Rush. Lear begins with an arrogance and rage that has come from his decades of ruling the kingdom, his frustration of having no son to be a natural heir, and his ego that requires undivided admiration and loyalty from all about him. As Lear descends into madness, Rush's skills as a mime come to the fore. His ability to transition - through his rubbery facial movements, mannerisms and voice - are compelling. It is a marvellous portrayal of a tyrant who becomes increasingly fragile and delusional. 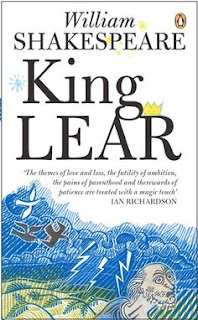 Nevin's Fool is a curious creation. After the Monroe sequence, spoke with a broad Aussie accent and dressed like Sir Les Patterson.   Her wisecracks are punctuated by percussion from the band.

The daughters played by Helen Buday, Helen Thomson and Eryn Jean Norvill were uniformly excellent. It was also lovely to see Max Cullen as Gloucester. The standouts of the non-headliners were Jacek Koman (Kent), Mark Leonard Winter (Edgar) and Meyne Wyatt (Edmund) and I look forward to seeing their careers progress.

On the night I attended, there was a QnA with the cast after the show. This was an intriguing event, with Rush being generous with his answers. Nevin and others seemed to wish they were elsewhere, were curt in their answers, and left quickly when it was over. I appreciate that they had just spent an exhausting three hours on stage, but it did feel a little dismissive of the audience after the thrill of seeing the production.

It is a rare treat to see an actor of Rush's calibre up close and personal and I feel privileged for having witnessed his brilliant Lear portrayal. I have had the great pleasure of seeing several Sydney Theatre Company productions in the last year or so: Cate Blanchett and Richard Roxburgh in The Present, and Hugo Weaving in Macbeth. STC always produces interesting plays with incredible talent, wonderful set decoration, and artistic direction. I was also able to see Kevin Spacey in Richard III in 2011 which was a real treat. My reviews of these productions are also on this blog.
Posted by Ina Guddle at 09:53
Newer Post Older Post Home