Remembrance of Things Past

In the most recent Quarterly Essay (QE60), Laura Tingle explores Political Amnesia - How we Forgot How to Govern. With a relatively new Prime Minister and an election on its way, this is a timely exploration of how politics in Australia has changed in the last twenty years. Tingle's main focus is on the value of institutional memory in the public service, Parliament and the media. 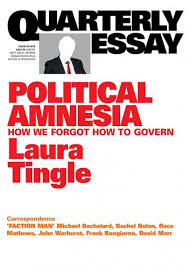 On the Australian Public Service (APS), Tingle reminds readers of the value of the bureaucracy which has provided successive governments with valuable, contestable advice. In the past twenty years or so the APS has been devalued. The push to privatise, with more emphasis being placed on consultants, has seen expertise leave the APS. The terminations of heads of department when governments change, has brought about a more cautious and cowardly APS. The managerialism from the private sector has also given way to an APS that believes in changing portfolios every two years so that no one gains deep subject expertise. The once revered APS has become a shadow of its former self.

On the media, Tingle talks about feeding the beast of the 24/7 news cycle. She argues that journalists have by and large become generalists, rather than subject matter experts. This means that policies can be reported on by people who don't have the deep understanding of the subject area and are unable to provide an effective critique. She also questions the value of the talking points given to all Ministers where they repeat predetermined lines about the issue of the day. With immediate deadlines and yesterday's news forgotten, journalists no longer have the time (and perhaps skill) to engage in thinking through policy, relating issues historically, and understanding the broader context. This results in taking at face-value what we are told without really engaging in issues.

But politics is Tingle's main target. She looks back over the years - Whitlam, Fraser, Hawke, Keating, Howard, Rudd, Gillard, Abbott and now Turnbull - and how they valued or dismissed institutional memory. As governments become younger and less experienced, Ministers race to make their mark through 'reform' - often introducing new policies that were tried and failed years earlier or trying to recreate something they have a vague memory of working previously without understanding the context of the time. The centralisation of control in the Prime Minister's office has also meant that debate and deliberation of an issue had been dismissed as undesirable.

Spanish philosopher George Santayana famously wrote that 'Those who cannot remember the past are condemned to repeat it'. For the last twenty years so much of what has come out of Canberra has been ensconced in a sense of deja vu. Let's hope that every member of government reads Tingle's essay and makes a conscious decision to build institutional memory and rebuild the APS.

I really enjoyed this Quarterly Essay. It is a compelling, intelligent, piece of journalism which makes a powerful case for improved policy making.